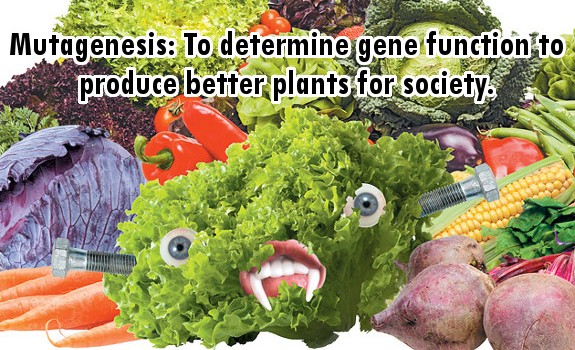 Leading chemical companies including BASF and DuPont may be tampering with our food supply under the radar via mutagenesis while GMOs take the heat. Though genetically modified organisms (GMOs) are the hot topic in agricultural activism today, some say mutant vegetables should be an even bigger concern, precisely because their effects are unknown and they are not on the global health radar.

The term ‘mutant vegetables’ conjures images of vegetables from outer space, but mutagenic plants are all around us, and may even be in your refrigerator. While GMO seeds are created by inserting specific genes into a plants genetic make-up, mutagenesis is a technique that creates random and unspecific genetic changes. This happens by mimicking the sun’s irradiation of plants by exposing them to radiation in a controlled setting in order to make them resistant to herbicides or develop other traits. It’s because the genetic changes of mutant plants are random and unspecific that we should be especially concerned.

The National Academy of Sciences, representing numerous experts in the field, says that “the risk of creating unintended health effects is greater from mutagenesis than any other technique, including genetic modification.”

While they go on to say the risks associated with mutant crops are small relative to that of foodborne illnesses like salmonella, the mere fact that they elevate mutagenesis above GMOs in regards to food safety should be a major red flag.

All plant breeding techniques can create unexpected and even potentially dangerous health effects in the form of naturally occurring toxins or allergens. In the case of mutagenesis, hundreds and even thousands of genes are deleted and rearranged randomly, resulting in mutations far less specific than what we see in GMOs. Worst of all, mutant vegetables are even less regulated than those that are genetically modified – as if GMOs face any real regulation.

Mutagenesis has been used for decades. BASF alone licenses its mutagenesis technology to 40 of the largest seed companies in the world, which turn around and sell mutant seeds to everyone from large ag producers to the farmer down the road. And you, the consumer, who eventually ends up searching for the healthiest option for your family, is none the wiser.

Mutant vegetables are not regulated by the USDA organics program. This means that a vegetable with the organic seal may still have undergone genetic rearranging through mutagenesis. Unfortunately, no matter how serious the effects may or may not be, this is currently an area that probably won’t undergo any change via consumer-voice for a while.

With regulations on genetically modified seeds getting tighter and global consciousness of their dangers increasing, seed companies may find incentive in going back to mutagenesis. It’s far cheaper than GMO and it’s a relative whisper among the global community.

The United Nations’ Nuclear Techniques in Food and Agriculture program has seen increased interest in mutant varieties, with 31 requests in 2013 to irradiate new foods around the world. Pierre Lagoda, in charge of the program ominously says, “These difficulties in getting a GMO to the market, we don’t have it in mutation breeding.”

2 responses to “Mutagenesis and Mutant Vegetables: More Dangerous than GMOs?”