What happens when you try to grow a mouse pancreas inside a rat and then transplant it back into the mouse? According to researchers at Stanford and Tokyo University, you cure mice of Type 1 diabetes. We aren’t supporting genetic modification here, but it’s worth reading about.

“Mouse pancreases grown in rats generate functional, insulin-producing cells that can reverse diabetes when transplanted into mice with the disease…” [1]

In 2010, Hiromitsu Nakauchi, a stem cell biologist at the Stanford University School of Medicine in California, and his colleagues used pluripotent stem cells to grow a rat pancreas in a mouse. The experiment was a flop because the pancreas only grew to the size of a normal mouse pancreas, making it too small to be implanted in a rat and taken for a test drive. This time, Nakauchi and his crew went for a roomier model. [2]

Before anything was injected into any of the rodents, the researchers genetically engineered rats to lack a gene that’s integral to developing a pancreas. Those GMO embryos were then injected with the pluripotent stem cells, which, in principle, can morph into any type of cell in the body.

When the embryos grew into rats, the rodents had a pancreas made up almost entirely of mouse cells.

The researchers then removed the pancreas, isolated clusters of the pluripotent stem cells, and transplanted them back into mice.  The pancreas reversed the mice’s diabetes and kept their sugar levels down for 1 year. None of the mice rejected the cells, even if they were only given anti-rejection drugs for 5 days after the transplant. [3]

“We found that the diabetic mice were able to normalize their blood glucose levels for over a year after the transplantation of as few as 100 of these islets. Furthermore, the recipient animals only needed treatment with immunosuppressive drugs for five days after transplantation, rather than the ongoing immunosuppression that would be needed for unmatched organs.” [2]

The discovery is being hailed as “a remarkable scientific achievement,” and it’s not difficult to understand why. About 120,000 Americans are currently on the organ transplant waiting list, and more than 20 people die waiting for one each day. A lot of those people have Type 1 diabetes, which is caused by the pancreas either not creating any insulin or not enough.

A limited supply of donated organs means that few people are ever implanted with insulin-producing cells from human donors. Daily jabs to check sugar levels and injections of insulin are the alternatives. [3] 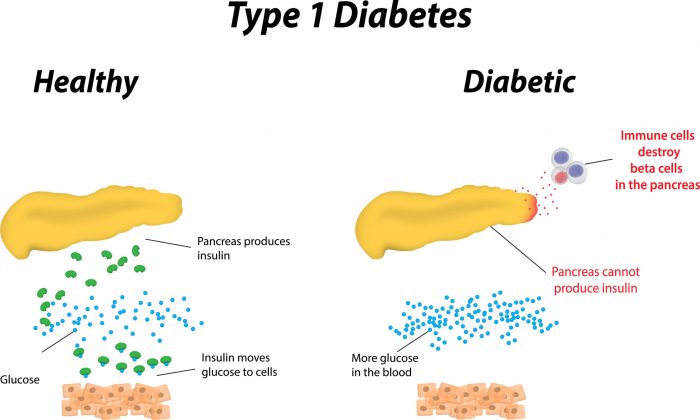 Read: Artificial Pancreas for People With Type 1 Diabetes Could be Available by 2018

In the past, diabetes patients have been infused with insulin-producing cells taken from pigs, but the treatment didn’t work because the patients rejected the foreign cells. Eventually, however, scientists will be able to engineer pigs and other animals to produce human cells that produce insulin, and these cells could then be transplanted into humans with fewer risks of rejection.

Qiao Zhou, an associate professor of stem cell and regenerative biology at the Harvard Stem Cell Institute, who didn’t work on the study, said:

“There are not that many ways to generate a functional adult human organ for transplantation that can save many people’s lives. This is one I think actually I can see work in the future.”

It will take a lot more research before the experiment can be conducted in humans, and science doesn’t have clear answers on how injecting cells from a genetically engineered animal into a human might affect humans in the long-term.

In fact, creating human organs inside of an animal might be a lot trickier, because pigs, monkeys, and sheep are much more different from humans than rats are from mice. Additionally, some of the rats in this study showed signs of rejection to the mouse pancreas growing inside of them. This breakdown of the host’s immune system needs to be studied and controlled.

There are also serious ethical issues to consider – as there are anytime genetic engineering is involved. Timo Otonkoski, a professor of medical stem cell research at University of Helsinki, who was not involved in the study, pointed out that some might not look too fondly upon the creation of human-pig chimeras: if human stem cells are injected into animal embryos, some of these cells will also go into organs like the brain. Pigs with part-human brains…Can you even imagine?

“The biological issues and the ethical issues are still in very preliminary phase. It’s still very hard to know if this has any real potential for human medicine. But it’s interesting biology and it’s interesting to explore whether these possibilities are real or not.”