MIT Scientist: Glyphosate to Cause Autism in 50% of Children by 2025

The chemical brew is sickening us all

As if to corroborate a growing trend in rising autism rates, a senior research scientist from MIT has warned that of all children, a disquieting 50% will be autistic by 2025. What’s the culprit? Monsanto’s best selling Round-Up containing glyphosate is top on the list.

The overuse of glyphosate in our food supply is causing diseases like Alzheimer’s, autism, cancer, cardiovascular disease, and nutrition al deficiencies, among others. Stephanie Seneff, PhD, a research biologist who has published over 170 scholarly peer-reviewed articles, and has studied these diseases for more than three decades, points to GMOs as a major contributor to neurological diseases in children.

Currently, one in every 68 children in the US is born with autism. It is currently the fastest growing developmental disability, with rates having increased by almost 120% since the year 2000. In ten years, the cost of treating those affected by autism will cost us $400 billion annually, in addition to the untold emotional costs which families pay daily to live with and support a child with autism.

Dr. Seneff noted that the symptoms of glyphosate toxicity closely resemble those of autism. She also presented data at the conference which shows an oddly consistent correlation between the use of Roundup on crops (and the creation of Roundup-ready GMO crop seeds) with rising rates of autism.

The correlation between the two include biomarkers such as zinc and iron deficiency, low serum sulfate, seizures, and mitochondrial disorders. 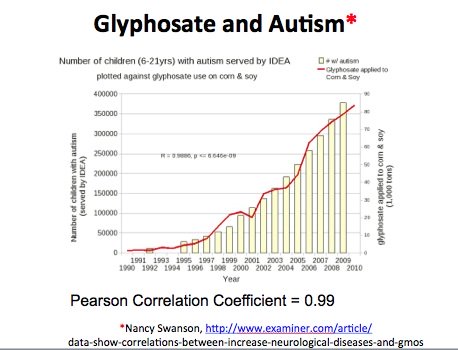 A fellow panelist who was in attendance reported that after Dr. Seneff’s presentation:

“All of the 70 or so people in attendance were squirming, likely because they now had serious misgivings about serving their kids, or themselves, anything with corn or soy, which are nearly all genetically modified and thus tainted with Roundup and its glyphosate.”

Read: Sick People Have High Levels of Glyphosate in Urine

Dr. Seneff pointed out that much of the food on grocery store shelves contains GM corn and soy, all with small amounts of glyphosate traces in them. This includes soft drinks sweetened with high fructose (and genetically modified) corn syrup, chips, cereals, candies, and even soy protein bars. Much of our beef and poultry is also fed a diet of GM corn and soy, which contain glyphosate traces as well.

Think your bread is safe? Think again. Wheat is often sprayed with Round Up chemicals just prior to harvest, which means unless your bread or wheat products are non-GM certified, and organic, they likely contain traces of glyphosate.

When you add it all up – we are dining on glyphosate in almost every food we eat, and it is causing serious illness. Dr. Seneff says that though the traces of glyphosate in each food may not be large, it is their cumulative effect that is of concern. Her worry seems well-founded considering that pregnant women have been found to have glyphosate in their blood and urine, and it has even showed up in fetal cells.

Furthermore, a relatively recent study showed that pregnant women living near farms where pesticides are applied have a 60% increased risk of children having an autism spectrum disorder.

Although glyphosate is not likely the only chemical to blame for increased autism rates, it tops the list of unsavory, neurologically-altering substances.

In addition to this toxic environment, there is a arguable link between vaccines and autism. A former CDC employee blew the lid off one such story finding the connection, and to it can be added other studies now showing a link between children’s exposure to pesticides and autism.

Add to glyphosate chemicals and vaccines which contain mercury – PCBs, PBDEs, and phthalates, and a perfect brew for autism rates to soar becomes apparent.

A few months ago, the USDA released a study finding that although there were detectable levels of pesticide residue in more than half of food tested by the agency, 99% of samples taken were found to be within levels the government deems “safe.” How can the government deem something safe if it has never been tested singularly – let alone how the effects from multiple exposures (PCBs, mercury, glyphosate, etc.) can devastate a child’s immune system and neurological soundness when considered together?

Though autism is a complex problem with many potential causes. Dr. Seneff’s data is particularly significant considering how close the correlation is—and because the claim is supported by a scientist with impeccable credentials.