Microplastics Are Now Showing Up in Organic Fertilizers

And humans are probably consuming it

If it isn’t bad enough that plastics are abundantly found littering the lands and oceans all around the world, now we’re finding that tiny plastic particles are showing up in organic fertilizer, having arrived there via food waste. [1]

There are few places on earth not affected by plastics pollution. The oceans are overflowing with minuscule microplastics, which are eaten by fish. The beaches are littered with microplastics, too, where they become unwanted condiments for land animals seeking a meal.

Organic fertilizer helps cut down on food waste, but it may be worsening the problem of plastics pollution.

In Europe, many people collect food waste to transform it into organic fertilizer, and the practice is growing in popularity in the U.S., too. The packaging, not the food waste, is contaminating organic fertilizers with plastic, only later to contaminate waterways, according to Ruth Freitag, a chemist at the University of Bayreuth in Germany.

“What happens most of the time is that people don’t like to put garbage into the bin as it is. They like to wrap it up.” [1]

Most people wrap the waste in a plastic bag, but Freitag said that by looking at the types of plastic that are being found in the fertilizer, she can tell that some of the contamination also comes from plastic food wrappers.

Freitag and a team of researchers write in the journal Science Advances that they’ve found plastic in fertilizer made from food waste from both commercial and household sources. These microscopic plastic bits result from the composting or “biodigesting” of processes that morph organic waste into fertilizer.

The samples studied by Freitag and her colleagues contained “varying amounts of tiny fragments, fibers and spheres of plastics, all less than 5 millimeters, depending on the care with which the compost had been processed.” [2]

It’s a case of good intentions meeting a certain degree of laziness and a long-held repulsion to the idea of “naked” food waste.

“Some good ideas work, but only when people are responsible.” [1]

From the Fields to the Oceans 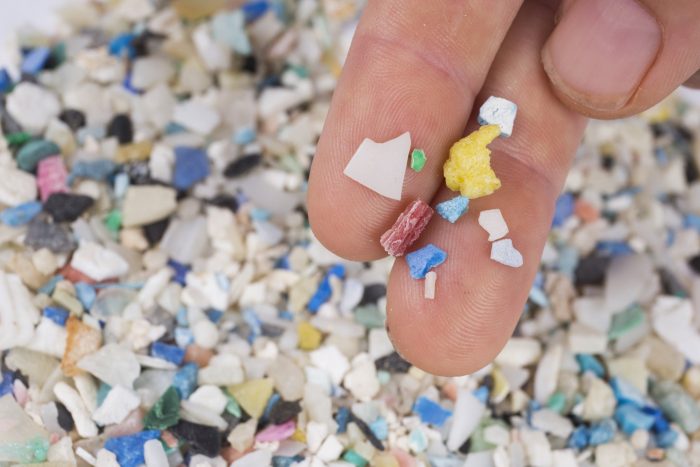 Despite finding relatively low concentrations of microplastics per kilogram of waste, the researchers said it is likely the particles will enter the food chain, where they could potentially be consumed by humans. [2]

She noted that Germany’s rather blunt and strict laws for recycling organic waste leave little room for irresponsibility or misunderstanding. Communities and businesses looking to recycle food waste should be acutely aware of how easily it can become contaminated with plastic, and follow Germany’s example. [1]

Because eventually, she added, the microplastics get washed out of the fertilizer that’s spread on land and make their way into waterways. Instead of creating a healthier environment, they contribute to the same planetary woes that many organic food growers and buyers are so passionate about ending.

Researcher Chelsea Rochman from the University of Toronto said:

“If we move away from the oceans and go upstream, there’s evidence of microplastics in rivers and lakes and other freshwater bodies.” [1]

Rochman noted recently in the journal Science that she’s found microplastics in what comes out of sewage treatment plants. The “sludge” is sometimes used for fertilizer.

“The sewage sludge, for example, that we’re spreading out on the earth [is] a source of plastic out into the environment. How is that interacting with animals and soils?” [1]

In past studies, scientists found that organic pollutants that leach out of microplastics, including PCB’s, flame retardants, and polyaromatic hydrocarbons, transfer to the fish that eat them. What happens to the humans who eat the contaminated fish?

Currently, there are more microplastics in the oceans than there are stars in the sky. But there’s reason to hope that humankind can get a grip on the problem and reverse course.

For example, the U.S. Senate voted in 2015 to phase out the use of plastic microbeads in soaps, body washes, and other personal care products, starting in 2017. The UK also began phasing them out last year.