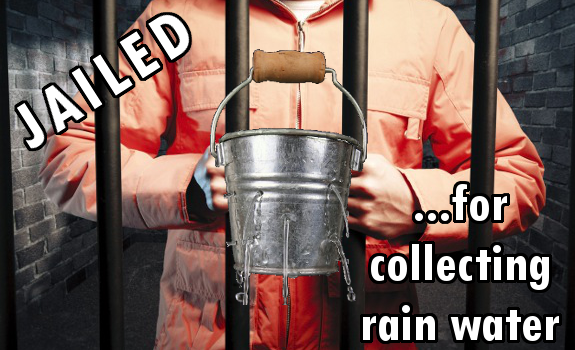 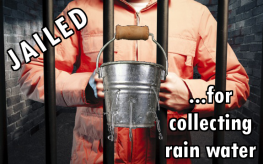 Since when do you need a permit to collect rainwater? An Oregonian man has been sent to prison after local authorities found he had collected more than 13 million gallons of rainwater in 3 man-made ponds on his own property.

Gary Harrington is a 64 year-old man now sitting in jail for collecting a God-given right. He and his brother asked the ‘water master’ for a water certificate in 1973, but since he was just collecting rainwater, they couldn’t issue him one.

Over time, Harrington has built three massive water collection reservoirs – ponds – on his 170 acre property on Crowfoot Road in rural Eagle Point. Just by collecting snow runoff and rainwater, his ponds hold more than 13 million gallons of water that he uses to irrigate crops, and ‘be prepared in case of forest fires.’ I guess the water privatization people are pissed. He has enough water to fill about 20 Olympic-sized swimming pools.

While Harrington likely uses some of his water for indoor use, which isn’t permitted in all states, it is permitted in Oregon. Harrington also gives a nod to self-sustaining sovereignty since he has stocked one of his ponds with largemouth bass, and built docks around the water.

“The fish and the docks are icing on the cake,” Harrington tells the Medford Mail Tribune. “It’s totally committed to fire suppression.”

What allowed authorities a loophole to arrest Harrington is that while water collection is kosher in Oregon, it is supposed to be done off of an impervious surface, like a rooftop. Oregon law dictates that water is not a publicly owned resource, and his set up with 10 and 20-foot dams definitely got their attention.

His lack of permits for such an outfit is what got Harrington convicted of nine misdemeanors and sentenced to 30 days in jail, slapped with a $1,500 fine, and ordered to destroy his dams to drain the water from his ponds. Ridiculous! While many places in the country are suffering from severe drought, a man is being told to drain 13 million gallons of water. It’s insane.

Harrington is now in a long, drawn out battle with Oregon’s Water Resources Department, but he surrendered himself last week to authorities to begin his sentence in a Jackson County Jail.

If a man can’t collect rainwater and melted snow on his own property, then the laws need to be changed. This is preposterous.

Watch a video on Gary Harrington’s case above.

16 responses to “Man in Oregon Jailed for… Collecting Rainwater”