The mainstream media is invoking déjà vu with their latest laughable attempt to frame yet another study that actually highlighted the benefits of organic into a hysterical anti-organic news frenzy. This time, however, some publications are actually publishing the truth on the matter. Why? Because last time that the mainstream media conglomerate decided to smear the last organic foods study’s findings and proclaim how great pesticides and GMOs are for you and your family, it ended in a major apology by the New York Times.

And it was this piece, a response to the uproar from the public following the alternative news media’s response to the mainstream media spin (including my piece first released on the night of the study with a video breakdown), that signified the final nail in the coffin for the mainstream media’s previous assault on organic foods. In the apology piece, New York Times columnist Mark Bittman states:

“That was dumb of me… I’m sorry. This junk science deserves a response. Ignoring it isn’t enough. I apologize.”

But now, once again, some sources such as CBS have begun spinning the latest organic food study. In this study, just like the last one, it was found that organic food contained less brain-damaging pesticides, has higher concentrations of antioxidants, doesn’t contain GMOs, brain-tumor-linked artificial sweeteners, mercury-containing high-fructose corn syrup, and so on. However many sources don’t seem to care about the facts. Instead, they title something like ‘Organic Same as Conventional Say Docs’. Meanwhile, some are erring on the side of the truth to avoid backlash.

But don’t take my word for it, just look at the below image from Google News. Notice the difference in titles? You can clearly see instances of nutritional doublespeak, in which news agencies title an article something wildly incorrect and then go on to say the opposite inside the content of the story. Considering that many — if not most — news readers glance at the title and keep reading onward, this is highly effective. 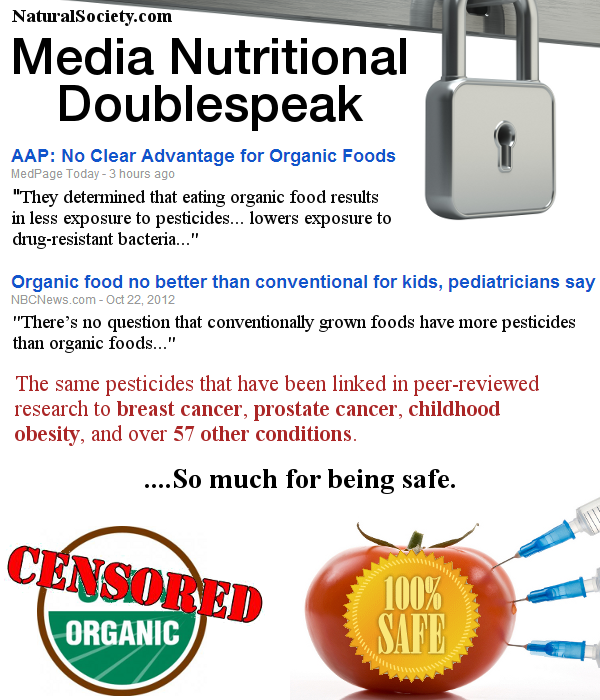 Titles such as ‘Organic food no better than conventional for kids’ ultimately lead to content explaining that organic food contains less pesticides and less antibiotic-resistant bacteria (that can result in resistant diseases like the white plague), but that it’s not ‘entirely conclusive’ whether or not this matters. Peer-reviewed research may argue otherwise, with pesticides linked to over 60 negative conditions including:

The reports also dare not to discuss the very real issues of GMOs (genetically modified foods). After all, it would give a large degree of credit to organic food and raise awareness over the fact that GMOs have been linked not only to brain tumors and organ damage in the recent French study, but conditions like infertility and infant mortality.

On the flip side, you can find a few mainstream stories that are actually titled properly (at least slightly) — most likely in response to the heated retaliation against the media’s previous spin campaign. The Wall Street Journal reads ‘Report Supports Organic Produce, but Not Milk‘, and the popular NPR news blog states ‘Docs Say Choose Organic Food To Reduce Kids’ Exposure To Pesticides‘.

Just as with the first media blitz on the previous flawed organic study, this entourage of headlines will ultimately generate the need for real news sources (almost entirely the alternative news community) to set the record straight.

9 responses to “Mainstream Media Launches Another Phony War Against Organic”