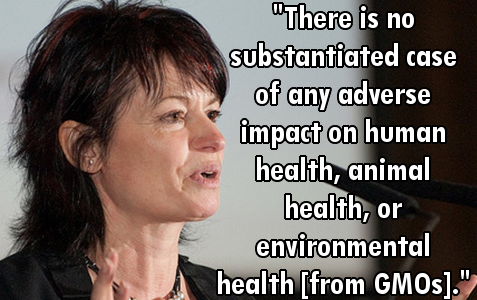 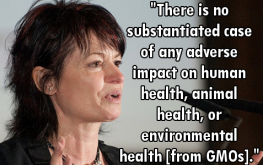 A respected member of the scientific community has written an open letter to Professor Anne Glover, the Chief Scientific Advisor to the EU President. He states that there is abundant evidence that GMOs cause harm and that the claim of there being ‘no adverse evidence’ of GMO impacts on our health and environment is an out and out lie. After reading this letter by Dr. Brian John, I hope you are impassioned enough to write a similar one to your own representatives, if not to Anne herself. They can’t keep lying to us if our voices are joined together.

The perfectly articulated letter is as follows:

I look on myself as a member of the global scientific community, with a background in environmental research and a long list of contacts in academia and within environmental, health, and consumer NGOs. Many of my colleagues are directly involved in research in the GM field, and between them they have contributed hundreds of articles to the peer-reviewed literature.

In 2012 you wrote: “If we look at evidence from [more than] 15 years of growing and consuming GMO foods globally, then there is no substantiated case of any adverse impact on human health, animal health, or environmental health.”[1] This statement has been repeated (as you knew it would be) by many individuals and organizations interested in the promotion of GM crops and foods, but it is nonetheless a lie.

In 2013 you wrote: “There is no evidence that GM technologies are any riskier than conventional breeding technologies and this has been confirmed by thousands of research projects. Food produced with GM technology is very common in other parts of the world, without any evidence that this has been harmful to the people that consumed it or to the environment at large.”[2]  With all due respect, that is a repetition of the same lie.

What literature do you read? And from whom do you obtain your scientific advice?

I wish to place on record that there is abundant and unequivocal published evidence, within and outside the peer-reviewed literature, of real harm to living organisms in the plant and animal kingdoms arising from the growing of GMO crops and the consumption of GMO foodstuffs.  This material is freely available to any scientist who chooses to examine it, and many of the key publications are found within a list recently compiled and published by GMO Free USA.[3] I am not impressed when somebody in your position purports to be unaware of this very large body of evidence.

Of course, there are others lists of publications, some purporting to demonstrate harm associated with GMOs, and others purporting to show that they are safe. You refer to “thousands of research projects” and pretend that they all reach the same conclusion.  That is of course nonsense. It is a sterile exercise to weigh up numbers and quality of papers for or against a proposition, and to claim that one set of papers is published in higher-ranking journals than another set. The point is that there is no consensus in the scientific community[4], and that it is absurd to retreat into a debate on what is “substantiated” and what is not. The fact of the matter is that there is a powerful case showing that GMOs are harmful, with the findings of many early papers substantiated and confirmed by subsequent research. To deny that case is to perpetrate a falsehood.

Will you please now retract your 2012 statement and accept that there is abundant evidence showing adverse impacts (both direct and indirect) on human and animal health and on the environment arising from the growing and consumption of GMO products?

And will you also issue an apology to those members of the research community whose publications (in peer-reviewed journals showing harm arising from the use of GMOs) you have so studiously ignored?

I look forward to your positive response on this matter.