Juul Labs, makers of the highly popular Juul e-cigarettes, increased the nicotine content of their products, spurring other e-cigarette makers to do the same. This, experts say in a new report, has led to a serious vaping epidemic among teens and young adults, and a nicotine “arms race” among e-cigarette companies.

Juul e-cigarettes first hit the market in 2015. Their liquid nicotine “pods” contained 5% nicotine at the time, while similar products made by other companies only contained 1-2% nicotine concentrations. Today, some competing brands contain as much as 7% nicotine.

You may hear that a single 5% pod delivers the same amount of nicotine as a pack of cigarettes, and since many people vape more than 1 pod per day, the habit is causing nicotine addiction. Keep in mind, e-cigarettes are touted by the industry as a way to help adults quit smoking traditional cigarettes. When it comes to young people, e-cigarettes are having the opposite effect.

But it’s difficult to pinpoint exactly who should choose the various pod strengths based on one’s smoking habits. One pod may equal a pack of cigarettes in terms of how long it would last for a smoker, but based on the information available, it seems that the nicotine delivered is often much more than a pack of cigarettes. Vaping liquid has become extremely potent.

Robert Jackler, a researcher at Stanford University and study senior author, said during an interview:

“Until recently, most e-cigarette liquids carried 1 to 2 percent nicotine, with a few considered ‘super high’ at 3 percent, intended for the two-pack-a-day smoker.”

According to various sellers of vaping products, a heavy smoker picking up vaping might want to start (though shouldn’t) with a strength of 24 mg/ml, while ‘normal’ smokers or those wanting to wean themselves off may begin with 14-18 mg/ml pods. Again, a 5% JUULpod contains 59 mg/ml.

Here is an image showing what I’m talking about. Note that it is from another e-cigarette seller. 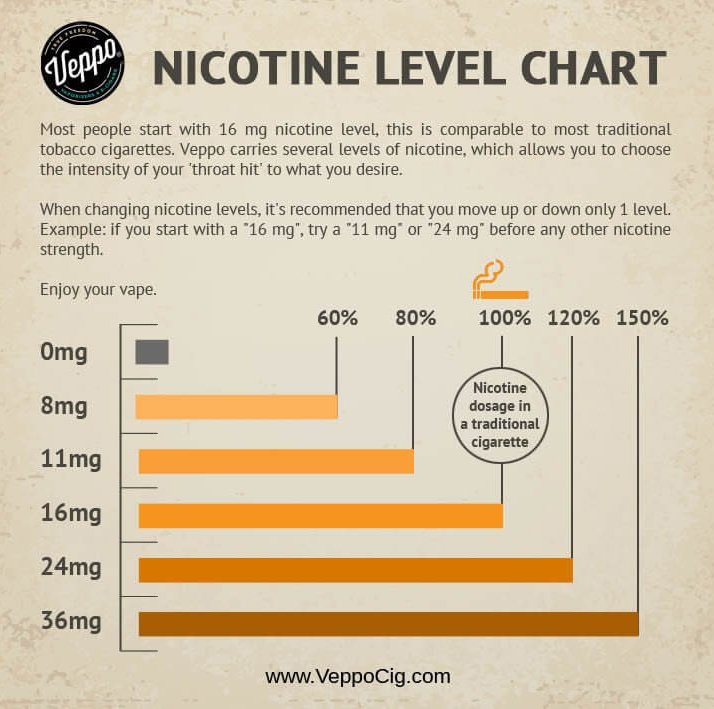 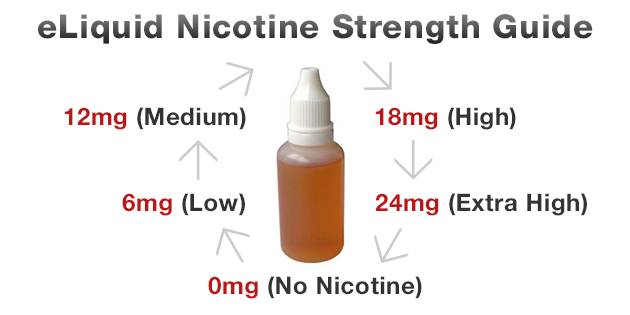 On an equally-disturbing side note, a survey released earlier this year found that a whopping 63% of actual Juul users didn’t know that every Juul pod contains nicotine.

Dr. Frank T. Leone, director of the Comprehensive Smoking Treatment Program at Penn Medicine, explained that the nicotine found in Juul pods gets delivered to the brain very rapidly because of the method the company uses to increase nicotine concentrations. Leone did not participate in the study.

Juul used a patented “nicotine salt” – a mixture of nicotine and an organic acid – which masks the naturally unpleasant taste of nicotine.

Due to the wide variation of pods, nicotine liquids, and tank systems, it has been “almost impossible to put any regulatory guardrails around these products,” Leone said.

The U.S. Food and Drug Administration (FDA) currently does not require e-cigarettes go through pre-market approval before reaching store shelves. In 2017, the agency decided that vape products that were on the market prior to August 2016 could remain on store shelves through 2022 without any pre-market review. Health advocates are calling for more regulation, sooner rather than later.

“When Juul came out with very high-nicotine electronic cigarettes, it triggered a nicotine arms race amongst competitive companies seeking to emulate the success of Juul.”

Read: The FDA is Threatening to Yank E-Cigarettes off the Market

There are 39 Juul knock-off e-cigarette devices that offer equal or higher amounts of nicotine than Juul. Worse, Jackler said many of them mislabel the amount of nicotine contained in the product. [2]

And because nicotine “juice” can be purchased in bottles, e-cig users can purchase high-nicotine liquids cheaper than they could purchase individual Juul nicotine pods. [1]

Adults and kids alike can become increasingly addicted, for less.

“The rush to higher and higher nicotine concentration has reduced the cost of nicotine addiction.”

Despite the deluge of warnings over the addictive nature of Juul and copycat products, sales of Juul skyrocketed 641% from 2017 to 2018. [2]

According to Jackler, e-cigarettes are not only a gateway to traditional cigarettes, but they may also be a gateway to harder drugs.

“For a teen, becoming nicotine-addicted greatly increases the likelihood that they will graduate to traditional, combustible cigarettes. Importantly, nicotine addiction during adolescence increases the vulnerability to subsequent addictions, like opioids or cocaine. For most users of illicit drugs, their initial addiction was to cocaine.”

The report is published in the journal Tobacco Control.