Obesity may be the Cause of Increasing Cancer Rates in Millennials

Decades of public health progress are at risk

Early detection and improvements in treatment have reduced overall rates of new cancer cases and cancer deaths, but lifestyle factors are keeping rates somewhat inflated across the board, even if some rates are going down overall. Actually, some types of cancer are increasing among Millennials, and researchers think obesity is fueling these increases.

A report from the American Cancer Society (ACS) and the National Cancer Institute (NCI) shows that obesity has been on the rise among all age groups for years. The latest federal numbers show that nearly 36% of American adults ages 20-39 are obese, and that may be an underestimate. If those numbers continue on an upward trajectory, 57% of all U.S. children will be obese by the time they reach the age of 35.

Between 1995 and 2014, the rates of 6 obesity-related cancers increased among adults ages 25-49, the report shows. These cancers include multiple myeloma, colorectal, endometrial, gallbladder, kidney, and pancreatic.

Although cancer is often associated with older age, the research shows that the sharpest increases were found in younger people.

Rates of kidney cancer had the sharpest annual increase for young Americans during that period: 6.23%.

Cancer is fueled by a great many things: genetics, environmental toxin exposure, smoking, activity level, diet, and numerous other lifestyle factors. What we may not have known years ago was how big of an impact obesity has on cancer development. Approximately 40% of all U.S. cancer cases can be blamed on obesity. It is a risk factor for some of the most common types of the disease, including breast, ovarian, and liver.

Read: Obesity to Become the Leading Cause of Cancer Among Women in the U.K.

By 2014, obesity was at the root of 60% of endometrial cancers, 36% of gallbladder cancers, 33% of kidney cancers, 17% of pancreatic cancers, and 11% of multiple myelomas among adults age 30 and older, the report says.

“Although the absolute risk of these cancers is small in younger adults, these findings have important public health implications.”

“The risk of getting colorectal, multiple myeloma, or kidney cancer is still much less in a 25- to 49-year-old than someone in their 60s and 70s, but that rate is what is sort of surprising and concerning.” 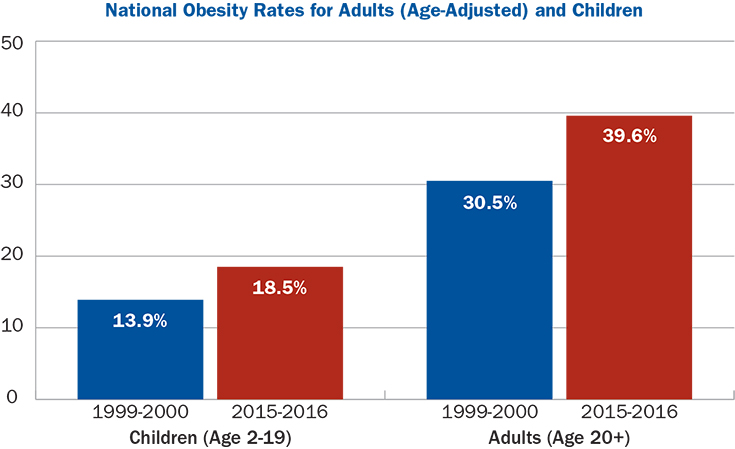 Obesity influences cancer risk in a number of ways. Excess weight can increase inflammation in the body, which can cause several different types of chronic conditions – including Type 2 diabetes – as well as fuel cancer cell growth.

Sex and growth hormones, such as insulin, can be altered by obesity and lead to the proliferation of cancer cells.

What’s more, some of the foods that can spur obesity are known carcinogens in and of themselves, including red and processed meats, as well as prepared food and junk food. [1]

The report does not directly link obesity to cancer, but it is impossible to ignore the fact that increases in cancer for young people coincided with a doubling in rates of childhood and adolescent obesity between 1980 and 2014. Leukemia and a type of lower stomach cancer were the only non-obesity-related cancers to increase among young people during the study.

The authors wrote that healthcare providers should do all they can to screen for and prevent obesity in their patients. If obesity-related cancers continue to climb, it could wipe out decades of public health progress.

“The future burden of these cancers might be exacerbated as younger cohorts age, potentially halting or reversing the progress achieved in reducing cancer mortality over the past several decades.”

The report is published in the journal Lancet Public Health.

There is an obesity epidemic in the United States. In September, the nonprofit groups Trust for America’s Health and the Robert Wood Johnson Foundation released a report showing that 7 states had adult obesity rates over 35% in 2017. Only Hawaii and Colorado had obesity rates under 25%. [2]