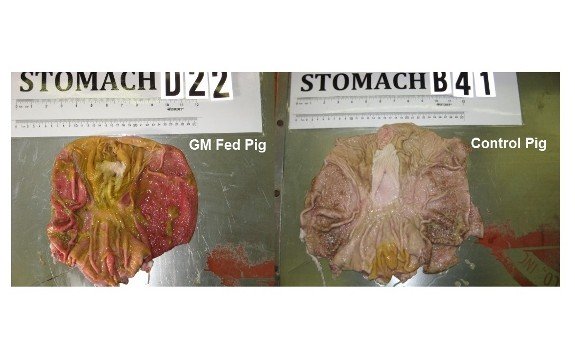 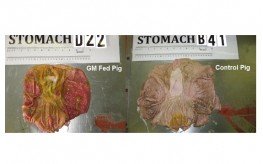 According to a new groundbreaking report analyzing the effects of GM feed on animals, scientists have found that pigs fed a diet of GM corn and soy experienced numerous adverse health effects, including sever stomach inflammation and an enlarged uterus. The results “are both biologically significant and statistically significant.”

Published in the Organic Systems Journal, the peer-reviewed study analyzed 168 just-weaned commercial pigs for 22.7 weeks, or just over 5 months. Half of the pigs were fed popular GM corn and soy varieties, while the other half were fed the same foods, only not GM (though it must have been difficult to find non-GM corn and soy since the vast majority of these two crops are indeed GM).

What the researchers found was startling:

“Our results provide clear evidence that regulators need to safety assess GM crops containing mixtures of GM genes, regardless of whether those genes occur in the one GM plant or in a mixture of GM plants eaten in the same meal, even if regulators have already assessed GM plants containing single GM genes in the mixture…In my experience, farmers have found increased production costs and escalating antibiotic use when feeding GM crops. In some operations, the livestock death loss is high, and there are unexplained problems including spontaneous abortions, deformities of new-born animals, and an overall listlessness and lack of contentment in the animals,”  Dr. Carman said.

Interestingly, and not surprisingly, this is not the first piece of research to find complications arising from GM food consumption. One French GMO study concluded that rats fed a lifelong diet consisting of genetically modified corn suffered serious consequences, including tumor development, heavy amounts of damage to multiple organs, and premature death. This isn’t surprising, seeing as one analysis found Monsanto’s GM corn to  be nutritionally dead and highly toxic.

“In some cases, animals eating GM crops are very aggressive. This is not surprising, given the scale of stomach irritation and inflammation now documented. I have seen no financial benefit to farmers who feed GM crops to their animals,” said Dr. Carmen.