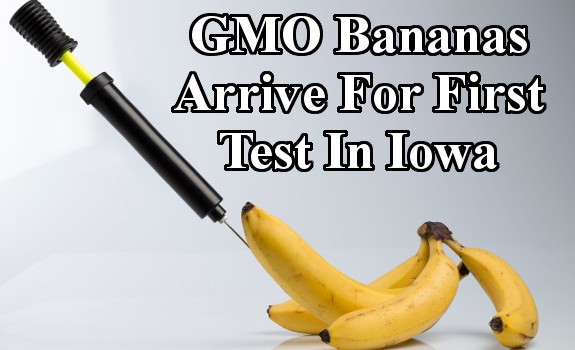 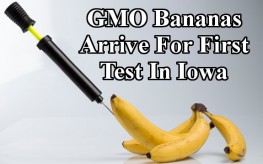 Human trials for the GMO banana have begun in Iowa. Volunteers are offering up their blood samples after eating bits of banana tinged with orange, receiving $900 for their subjection to the latest biotech concoction.

This is the first human trial in the US on a genetically engineered banana that has been altered to contain higher levels of beta carotene, which our bodies then convert to Vitamin A. This is the second food that biotech has tried to engineer to boost Vitamin A levels, since they are low in developing countries, and the cause of serious disease of malnutrition.

The first food was Golden Rice, which was a failure. Golden Rice was developed by applying for over 70 different patents, but it did not provide a solution to third world countries looking for better nutrition, who rely heavily upon rice as a staple food. Why scientists aren’t just giving developing countries Vitamin A supplements, which are much cheaper to administer, and don’t require patents, is anyone’s guess.

Researchers conducting GMO banana trials in the US want to be sure that the fruit does lead to higher Vitamin A levels in the volunteers’ blood, but are they testing for any of the other ailments that GMOs have caused, like leaky gut syndrome, cancer, or reproductive failure?

Iowans who participate in these first trials are playing their part in a story which may unfold around the globe. The GMO bananas were created by a researcher at the Queensland University of Technology in Brisbane, Australia, with funding from the Bill and Melinda gates Foundation. Interestingly, the Gates Foundation has also donated heavily to NPR, which is partly responsible for the public relations campaign to try to get support for GMO bananas.

If trials go well in Iowa, and other US states, they are headed to Uganda, where they are meant to ‘treat’ people with Vitamin A deficiency. Bananas are part of the staple diet in this and other developing countries.

The researcher conducting trials at Iowa State University is reluctant to discuss the details. She wrote to NPR, if I talk about what we are doing, it “could preclude me from publishing our findings in a peer-reviewed scientific journal.”

A specialist on nutrition at the International Food Policy Research Institute says that even if a real-world African village starts eating GMO bananas, that impact, “is a very hard thing to measure.”

You can be sure that when the trials pass – because we all know they are already essentially predetermined due to our regulatory agencies being bought out by biotech, that biotech interests will go from village to village, promoting these GMO bananas in Africa without really knowing the long-term ramifications of feeding people genetically altered food.