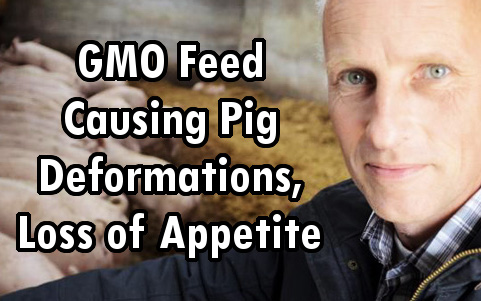 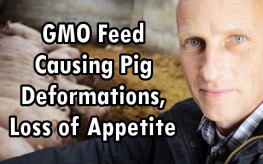 It isn’t a glamorous topic, but if you really want to know what feeding livestock genetically modified crops in the form of animal feed does to their gastrointestinal health, just ask the Danish farmer, turned anti-GMO activist, Ib Borup Pedersen. He has watched baby pigs turn their noses up at food, and older piglets contract extreme cases of diarrhea just after eating genetically modified feed.

Farmer Pederson says, “It shocks me that the industry does not take the evidence of Roundup’s and glyphosate’s harmful effects more seriously than it does.” The farmer feeds his pigs only non-GM feed, and thinks all genetically modified food should be banned.

Soy is one of the most commonly used crops in livestock feed, and it is heavily sprayed with glyphosate. Most GMO soy is meant to withstand the chemicals and still grow, but there is evidence that with all the spraying of toxic chemicals, GM soy is completely altered, and therefore should not even be considered a ‘food.’

“The pesticide ‘Roundup’ works by inhibiting an enzyme that is necessary for the plant to synthesise certain aromatic amino acids, killing the plant. The targeted enzyme is called 5-enolpyruvyl shikimate-3-phosphate synthetase, or EPSPS. The genetic modification in Roundup Ready soybeans involves incorporating a bacterial version of this enzyme, (from Agrobacterium species, strain CP4) into the soybean plant, giving the soybean protection from Roundup.

Because of the way that this gene was incorporated into soybeans, several other genes are also present. They are: the cauliflower mosaic virus 35S promoter, the EPSPS chloroplast transit protein (CTP) sequence from petunias and the 3′ untranslated region of the nopaline synthetase gene (NOS3′). The ANZFA document completely omits discussion of the first and last of these genes and their proteins.

For the petunia CTP, the applicant document states: ‘…it is generally accepted that the chloroplast transit peptides are rapidly degraded after cleavage in vivo by cellular proteases.’ That is, results from other general experiments are relied-upon and no evidence is provided that they have measured this to be the case in Roundup Ready soybeans.”

This Dutch farmer watches pigs that eat GMO feed develop gastrointestinal issues, and in humans there is evidence that glyphosate can cause autism and other chronic diseases, along with gut disorders. Pederson explains that the National Institute of Animal Science has already shown 25 years ago that RoundUp could harm animals. Now, he sees it first hand. He once fed his herd GM soy, and this resulted in deformed pigs, reproductive problems, and piglet diarrhea. Sounds appetizing, doesn’t it?

Simply by changing his pig’s feed to non-GMO, he has seen liter sizes grow 1.8%, higher milk yields, and lower incidence of ulcers and deformed piglets. Recently, he ran out of non-GM feed, and had to purchase GM feed in a pinch to feed his animals. He immediately received reports from his herdsmen that his animals were all sick. Pederson blames the chemical industry for lying to him and other farmers about the effects of using GM feed.

“We’ve never been told the truth about the dark side of the chemical agents. We only heard about the production advantages,” he said. Now that Pederson and other farmers are figuring out they were lied to, perhaps they can collectively boycott the use of all GM feed, and put the biotech giants out of business for good.