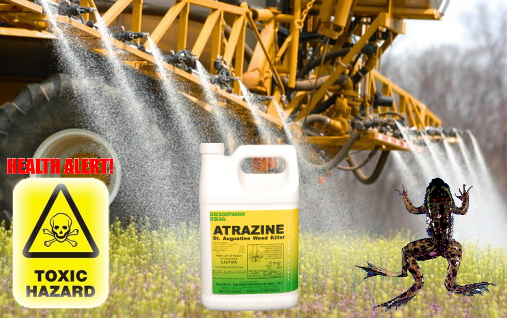 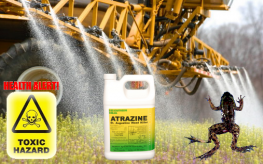 The poisoning of the public water supply doesn’t end with fluoride. After a 10-year battle fighting with Syngenta’s shady scientists on their herbicide/pesticide, Atrazine, one brave man, Jason Rohr Ph. D. is proving that the US EPA has rejected all scientific studies on the chemical except the one funded by Syngenta.

The second largest selling pesticide in the world, Atrazine is a weed killer that has been used heavily on farms across North America for more than 50 years. It is sprayed primarily on corn crops, but also on soybeans, sorghum, sugarcane, pineapple, and even Christmas trees. It is also used in tree harvesting. The run-off (from over 80 million pounds used annually) ends up in streams, rivers, and often our drinking water.

Rohr is an expert on Atrazine and its effects on amphibians. He has based some of his research on the work of Harvard educated, Tyrone Hayes, the PhD scientist that dared to try to publish studies showing that Atrazine was causing endocrine damage to frogs and fish, though he was once employed by Novartis, the chemical company that later became Syngenta Crop Protection. His laboratory proved that Atrazine, the number one selling chemical of Syngenta, was a potent endocrine disruptor that castrated and feminized male amphibians.

The chemical essentially turned males into females. Despite his findings, Hayes was prohibited from publishing his findings, and was coerced into resigning from his position. Instead of giving up, he gave hundreds of lectures all over the world, trying to warn people of the effects of Atrazine.

In the documentary Pesticide Peril, Hayes discusses how Atrazine has infiltrated our water supply. In the heyday of pesticides, the 1990s, Atrazine was getting much attention due to an increase in livestock deaths and increased cancer rates on farms. It was proven to be contaminating water all over the country. Hayes states that “Atrazine is the number one contaminate of drinking water in the US and likely globally.”

Hayes has tested water all over the country, and in Pesticide Peril, he is shown in the dark of night gathering frogs from a Northern California river to test for Atrazine. He is certain that what is bad for frogs, is bad for people. There have been studies that show a correlation between Atrazine exposure in humans and low sperm count, but these are often shielded from public view. Atrazine also causes an increased risk of breast and prostate cancer, and deformities of the genitalia.

Health Canada and the US EPA know that Atrazine is contaminating our water, but they refuse to look at any studies except one funded by Syngenta to assess its possible damage to public health. Government agencies are essentially part of the pesticide industry.

Ann Bryan, Senior Manager for Syngenta, told 16×9, in a statement:

“Regarding other impacts of atrazine, the EPA stated very clearly in its presentation to the July 2011 Scientific Advisory Panel that the available data do not support any association between atrazine exposure and cancer.”

However, as part of a class action lawsuit settlement enforced in 2012, Syngenta paid $105 million to more than 1000 municipal water systems in the U.S. to help pay for the removal of Atrazine from our drinking water, yet Syngenta denies any liability.

Rohr is not surprised by Hayes’ findings. He has conducted hundreds of studies on Atrazine at his lab, also stymied after finding similar results. Chief pesticide lobbyist, Dawn Forsythe, for one of the companies that became Syngenta, has said:

Even Forsythe wanted to warn the public that there was a link between Atrazine and breast cancer, but her boss told her she couldn’t even say the words, ‘breast cancer’ for a year.

Atrazine is anything but safe, and Syngenta, like other biotech and chemical giants, are blocking the science that would prove otherwise. Rohr says all studies except one are barred from being released to the public. You can watch the full video about this issue here.