As of July 15, 605 official complaints were lodged by farmers, homeowners, and others with state departments of agriculture about suspected dicamba damage across states that grow soybeans. The weed-killing chemical has damaged not only soybeans, but all other specialty crops including vegetable plants, fruit trees, ornamentals, trees, and more. 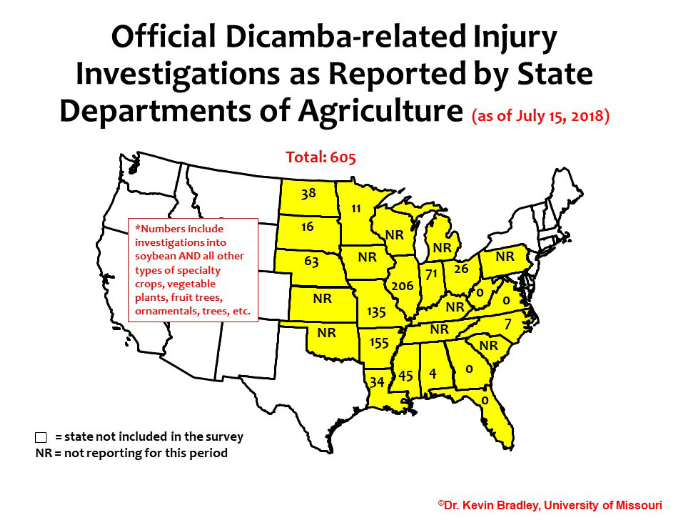 But university Extension experts say much of the damage probably has yet to be reported. An estimated 1.1 million acres of just soybeans have been damaged by dicamba drift, including in Arkansas. The state has an in-season ban on the herbicide but is home to an estimated 400,000 acres of damage and 155 official complaints.

Dicamba drift refers to the wind-fueled transference of the chemical from targeted plants to non-targeted plants. The herbicide mimics the plant hormone auxin and when it lands on a non-targeted plant, it causes uncontrolled growth and eventually kills everything it touches. Moreover, when it crosses into adjacent fields, it delays the flowering of plants vital to the honeybee population. 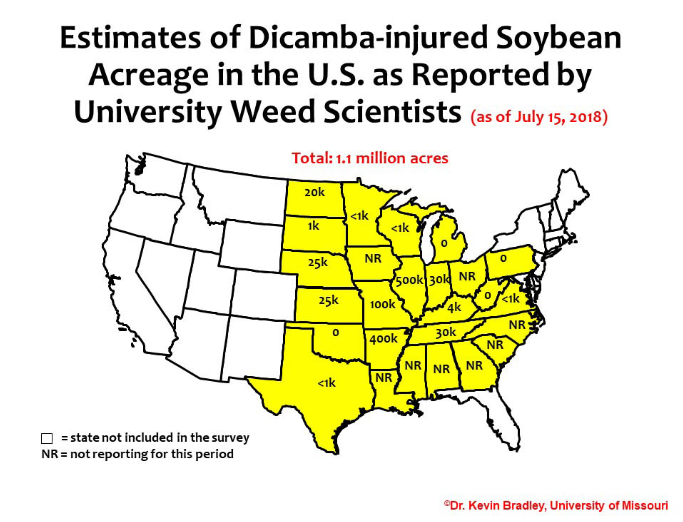 In 2016, the largest peach grower in Missouri, Bader Farms, sued Monsanto, dicamba’s manufacturer, alleging that dicamba drift damaged about 7,000 of their peach trees, resulting in a loss of $1.5 million.

“I can’t really say this year is an improvement over last year. In Missouri we have 156 complaints as of yesterday (July 23), 80 from the Bootheel and I expect the number in the rest of the state to grow.”

About 95% of the soybeans grown in Missouri are Roundup Ready Xtend crops, so Bradley had hope that this year’s damage wouldn’t be as severe as 2017’s.

“We’re seeing northwest and northern Missouri have way more problems, it’s yet to be determined how bad it’s going to be.”

Compared to late-July 2017, there were 1,411 dicamba-related investigations across soybean growing states. At the time, weed scientists estimated 2.5 million acres of soybeans had been damaged by the Monsanto-made weed-killer product.

“It should be noted that these totals (the current number of acres, 1.1 million, and complaints, 605) do not reflect what has happened in those states who were unwilling to participate and provide information for this survey.”

In coming up with the estimates, Bradley and his colleagues take into account label changes, mandatory training, and cut-off dates in certain states, such as Missouri and Arkansas.

In late July 2018, two regulators from the U.S. Environmental Protection Agency (EPA) visited research fields in Mississippi funded by the state to assess the damage.