There's less damage this year, but still plenty of it

Roughly 383,000 acres of soybean crops have been injured by the weed-killer dicamba as of June 2018, according to University of Missouri plant sciences professor, Kevin Bradley.

Dicamba destroys everything it touches, other than the crops that are genetically engineered to withstand it. “Dicamba drift” is a well-known term associated with the herbicide because the chemical can be picked up by the wind and land on neighboring non-targeted fields, stunting plants’ growth, and leaving them wrinkled or cupped. 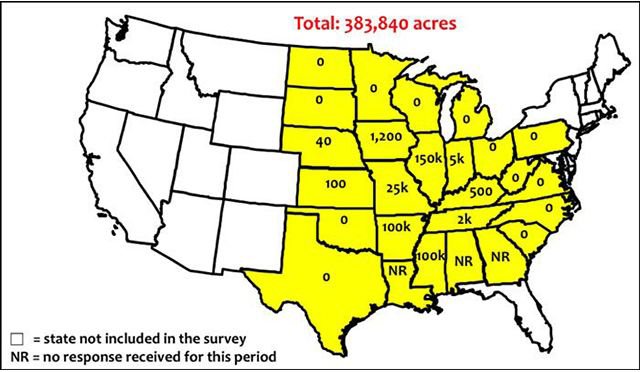 Non-targeted crops and trees have been harmed by dicamba drift for numerous growing seasons, according to Bradley, who has tracked the damage caused by the weed-killer extensively.

In 2017, Monsanto’s (now Bayer) new dicamba-based herbicide, XtendiMax, was approved by the U.S. Environmental Protection Agency (EPA) for use on the company’s Xtend soybeans and cotton. That growing season, XtendiMax reportedly damaged an estimated 3.6 million acres of off-target crops in more than 2 dozen states.

Many crops were also devastated in 2016 when 10 states reported hundreds of thousands of crop acres damaged by the apparent misuse of older, unapproved versions of dicamba.

The summer of 2018 has fared a bit better, but the damage was still palpable, according to Bradley.

“Many growers in [Missouri] have adopted the Xtend trait so they don’t experience dicamba injury on their soybean crop for a third season in a row. Since the adoption of the Xtend trait is so high in this area, relatively speaking there seem to be fewer soybean fields with injury this year compared to last.

However, just as in the past two seasons, there are still fields of non-Xtend soybean in this area showing injury from one end to the other.

More surprising to me than that has been the extent of the trees that are showing symptoms of growth regulator herbicide injury in that part of the state where the adoption of this trait is so high.”

Compared to 2017, 2018 has seen more cases of off-target movement of the chemical to specialty crops, vegetables, ornamental plants, and trees, said Bradley. [2]

He writes in the report:

“I have personally witnessed this increasing problem of off-target dicamba injury to “other” crops and tree species in the calls I have received, field visits, and “windshield surveys” of Missouri that I have taken the past few weeks, especially when driving around southeast Missouri last week.”

Here are the soybean injury numbers in 2018 (could actually be much more), by acres, in individual states, according to the University of Missouri: [1]