Illegal spraying and drift damaged thousands of acres of crops

On July 7, 2017, officials in Arkansas and Missouri enacted a temporary ban on dicamba, the herbicide blamed for vaporizing and damaging crops which have not been genetically engineered to withstand the weedkiller. The Arkansas Plant Board had voted June 23, 2017 to temporarily ban the spraying of dicamba on any crops except pasture land for 120 days. [1]

The bans come as complaints about suspected dicamba drift continue to snowball. More than 130 cases of dicamba drift have already been reported in Missouri this year, eclipsing last year’s totals, which resulted in heavy crop losses for farmers in the Bootheel region of the southeastern part of the state.

Missouri Director of Agriculture Chris Chinn announced in a July 7 news release that, effective immediately, sales and on-farm use of dicamba products would be suspended. The Missouri Department of Agriculture said the move is being made “with an abundance of caution and is temporary until a more permanent solution is reached.”

Chinn said in the release:

“We want to protect farmers and their livelihoods. At the same time, my commitment to technology and innovation in agriculture is unwavering. That’s why I am asking the makers of these approved post-emergent products, researchers and farmers to work with us to determine how we can allow applications to resume this growing season, under certain agreed upon conditions.”

In Missouri, dicamba drift damaged nearly 45,000 acres of crops, including soybeans, commercial tomatoes, watermelons, cantaloupes, grapes, pumpkins, and residential trees and gardens. According to the Missouri Soybean Association, that’s too conservative, by far. The group estimates that 200,000 acres of soybean crops have been damaged by dicamba. [1] [2] 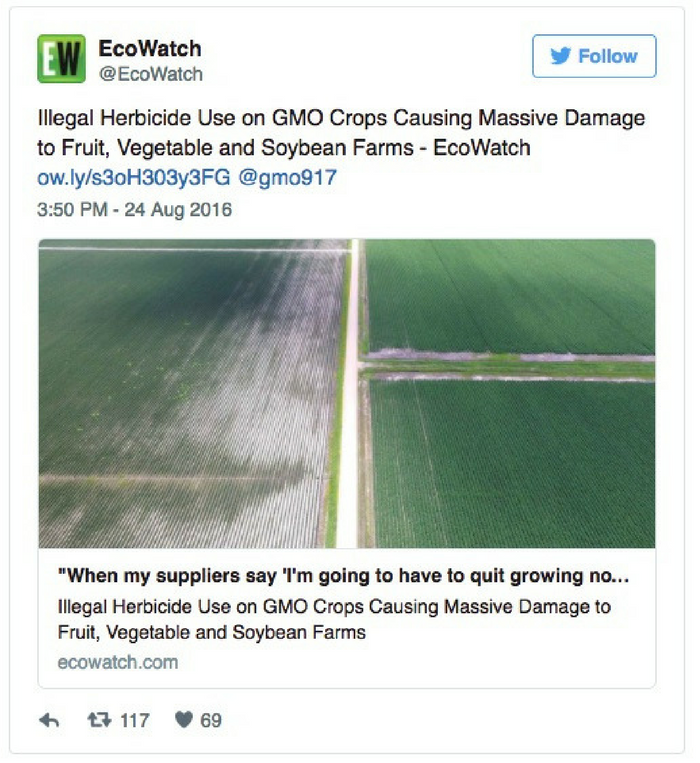 In 2016, Missouri’s largest peach grower, Bader Farms, sued Monsanto, one of the manufacturers of dicamba, alleging the herbicide caused extensive damage to the farm’s peach trees over the previous 2 years.

Monsanto released a statement saying the biochemical company is complying with the Missouri order, and encourage “all growers, retailers, and distributors to do the same.” [2]

It goes on to say:

“We spent years developing the XtendMax with VaporGrip Technology to minimize the potential for off-site movement. We want to stress how important it is that growers and applicators who use our product follow the label requirements and any local requirements. Monsanto is committed to remaining actively engaged in this conversation and doing our part to help farmers use the Roundup Ready Xtend Crop System successfully.”

Before XtendMax was approved for use, some farmers applied the herbicide illegally.

About the Arkansas ban, Monsanto said:

“We sympathize with any farmers experiencing crop injury, but the decision to ban dicamba in Arkansas was premature since the causes of any crop injury have not been fully investigated. While we do not sell dicamba products in Arkansas, we are concerned this abrupt decision in the middle of a growing season will negatively impact many farmers in Arkansas.”