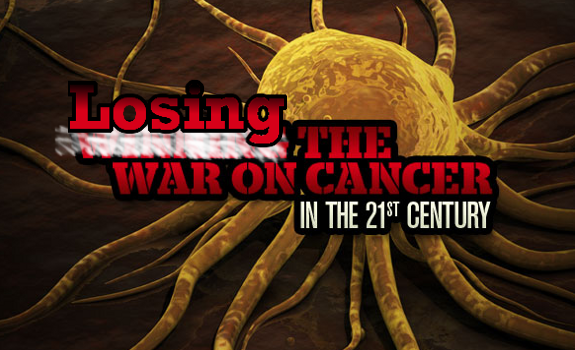 The National Cancer Institute has just confirmed via a newly released report that the ‘war on cancer’ over the last 30 years has led to more than 1.3 million people (primarily women) being wrongly diagnosed with cancer. This is not to mention that cancer rates have been continuously rising while incredibly expensive cancer treatments are failing.

Breast cancer diagnosis has been found to be especially suspect. Many of the ‘lumps’ found in women’s breasts are completely normal and benign. What’s more, constant screening with mammography equipment actually exposes women to harmful radiation that can cause cancer, as evidenced by a UCLA study which shows how radiation treatments promotes malignancy in cancer cells instead of eradication. These breast screenings are very carcinogenic, but, as if to add insult to injury, thousands of women are misdiagnosed with breast cancer every year.

The recent study published by the Journal of the American Medical Association has a hopeful subtitle: Overdiagnosis and Overtreatment in Cancer: An Opportunity for Improvement. At least they are calling to light the obvious obsession we have had with chemotherapy and radiation for treatment of cancer. And now they have called into question the means by which it is diagnosed.

Read: 6 Simple Ways to Reduce Your Risk of Cancer

“Over the past 30 years, awareness and screening have led to an emphasis on early diagnosis of cancer. Although the goals of these efforts were to reduce the rate of late-stage disease and decrease cancer mortality, secular trends and clinical trials suggest that these goals have not been met; national data demonstrate significant increases in early-stage disease, without a proportional decline in later-stage disease.”

The study also points out that early screenings were meant to lessen the burden of those who suffer in late stage cancer, but the screenings have simply not done their job. Not all cancers lead to death, and by being overly paranoid about the medical diagnosis, many radical treatments, including the aforementioned tools most often utilized by mainstream medicine, are often prescribed.

“The practice of oncology in the United States is in need of a host of reforms and initiatives to mitigate the problem of overdiagnosis and overtreatment of cancer, according to a working group sanctioned by the National Cancer Institute.

Perhaps most dramatically, the group says that a number of premalignant conditions, including ductal carcinoma in situ and high-grade prostatic intraepithelial neoplasia, should no longer be called “cancer.”

Instead, the conditions should be labeled something more appropriate, such as indolent lesions of epithelial origin (IDLE), the working group suggests.”

This study gives us an opportunity to look at alternative methods of both diagnosing and treating cancer, which are numerous. Preventative actions do not cause cancer as chemo and radiation do. Consuming more cancer-fighting foods or changing a person’s exercise habits are two methods to prevent and even reverse cancer. Not to mention the numerous herbs and phytonutrients which have proven to prevent and treat any number of cancers.

These natural solutions are probably just as effective as annual screenings, and are definitely safer. Taking better care of our health means we won’t develop cancer, and also enhances our overall quality of life in the here and now.

One response to “Devastating Report: Cancer Misdiagnosed in Over 1.3 Million Cases”