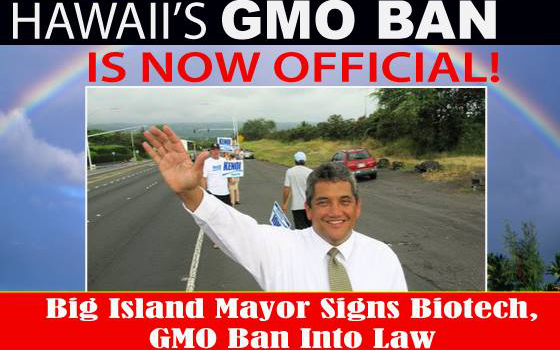 Hawaii is a unique place – not only because of its cultural and agricultural diversity, but because the politicians sometimes actually listen to the demands of the people. Fortunately, the mayor of the Big Island Hawaii, Billy Kenoi, has now banned biotech GMO from his island, and thousands of Hawaiians are cheering his decision to sign Bill 113, even though the agriculture industry largely opposed it. He can stand proud no matter what part of the islands he travels too, as this unprecedented move to keep the ‘aina,’ or land pure has been upheld.

Furthermore, Kenoi wants to encourage community-based farming and ranching, with a nod to local commerce instead of international biotech monopolies. The only problem with the bill is that is exempts the island’s GMO papaya industry, but it is a huge step in the right direction to ban GMO crops.

In a letter to city council members Kenoi states:

“Our community has a deep connection and respect for our land, and we all understand we must protect our island and preserve our precious natural resources . . .We are determined to do what is right for the land because this place is unlike any other in the world.”

On an island, it is hard to run away from the fruits of your labor, or your political decisions – you might run into a farmer that feeds your family at the grocery store, or the mother who visited your last public forum meeting on the beach.

This bill was signed just weeks after Kauai passed its own law relating to GMO and disclosure of pesticide use by biotech companies.

In places where the land is so beautiful, it is easier to understand what is at stake when GMO interferes with Mother Nature. If you live in paradise compared to a concrete jungle, you become less disassociated from nature, and the food, shelter, and textiles around. Hawaiians are especially proud of the of land for this reason, but their message can be carried throughout the world.

Hopefully this act against Monsanto, Syngenta, and other biotech giants in Hawaii will spark similar GMO banning bills in other states – such as Maine and Connecticut recently passing GMO labeling bills.