Due to some compounds in cinnamon

Beginning a new semester or school year at high school or a university may be exciting, or it may be filled with stress, which is likely to increase as assessments pile up. Fortunately, there are natural remedies that can help with learning ability, and a new study shows that cinnamon may be one of them.

After consuming cinnamon for one month, however, the poor learners were completing the maze puzzle at the same time as the good learners, instead of making so many wrong turns.

When the brains of mice from both groups were examined, the poor learners had more of one protein and less of another than the good learners at the beginning of the study. After the month of cinnamon consumption, the levels of these proteins were the same in both groups.

Researchers stated that these effects were most likely due to some of the compounds in cinnamon, such as cinnamaldehyde, which gives the spice its aroma and flavor. These are metabolized in the liver to form sodium benzoate, which was reported to stimulate plasticity – the ability to learn and adapt – in the hippocampus, the area of the brain responsible for memory.

Initially, plasticity of neurons in mice that learn poorly was much lower than those who could learn more effectively. It also improved the structural integrity of the brain cells, which in turn improved their communication with each other. Integrity of cultured hippocampal neurons was measured by the spine density.

Now, clinical trials are being planned, as there is hope that cinnamon extracts may help to ward off Alzheimer’s and Parkinson’s disease, besides helping stressed out students. 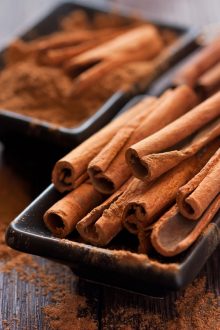 Cinnamon for More than Learning Ability

But isn’t cinnamon just a food, or a mere spice used for flavoring? Actually, cinnamon has been used in traditional medicine to treat conditions such as diabetes for many years.

A study on diabetic rats trying to confirm this found that cinnamaldehyde reduced blood glucose by 63% compared to the control group. A dose of 20mg per kilogram of body weight also significantly decreased the amount of haemoglobin (the oxygen-carrying protein on blood cells) that was tangled up in unabsorbed sugar; increased the liver’s normal stores of sugar and increased the level of insulin. Additionally, it normalized liver enzyme levels. Yeah, it seems cinnamon for diabetes really works.

These are just some of many cinnamon health benefits.

Although human clinical trials have not been conducted on cinnamon’s ability to improve learning, it may be still worthwhile to add it to your daily diet. Cinnamon could be added to oatmeal, cereal, or yogurt at breakfast, or consumed as part of chai tea. It could also be added to smoothies, hot chocolate, pancakes, or muffins. One idea is to combine half a cup of cottage cheese with diced apple and a pinch or more of cinnamon, among many others.

US Department of Veterans Affairs

One response to “Cinnamon Could Increase Ability to Learn, Study Says”