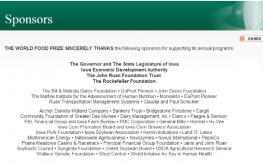 Three ‘distinguished’ biotech scientists, with Monsanto’s executive vice president being one of them (as NaturalSociety pointed out in previous posts), have been awarded the World Food Prize during a ceremony at the U.S. State Department, where Secretary of State, John Kerry, delivered the keynote address. Interestingly enough, Monsanto and Syngenta are major sponsors of the World Food Prize, along with the biotechnology giant, DuPont.

‘High fives all around. Victory for poisoning the people. Good work, mission accomplished.’ Is that what we as a nation are supposed to say?

When the president of the World Food Prize, Ambassador Kenneth M. Quinn, announced the winners he also commented on the impact of their work:

“These three scientists are being recognized for their independent, individual breakthrough achievements in founding, developing, and applying modern agricultural biotechnology,” Quinn said. “Their research is making it possible for farmers to grow crops with improved yields, resistance to insects and disease, and the ability to tolerate extreme variations in climate.”

Furthermore, in a written statement, Dr. M.S. Swaminathan, the renowned Indian scientist and Chairman of the World Food Prize Laureate Selection Committee, expressed his sentiment saying that the award is especially appropriate this year.

“2013 marks the 60th anniversary of the discovery of the double helix structure of the DNA Molecule by James Watson, Francis Crick and Morris Wilkins,” Swaminathan said. “During the last 60 years, the science of molecular genetics, also referred to as New Genetics, has opened up uncommon opportunities for shaping the future of agriculture, industry, medicine and environment protection. It is therefore appropriate that the World Food Prize is being awarded this year to some of the pioneers of the New Genetics who have opened up opportunities for achieving a balance between human numbers and the human capacity to produce adequate food.”

If that isn’t an outright admittance of a plan to control the world population through DNA alteration an errant GMO-induced disease, I don’t know what is. It’s sickening that these leaders are patting themselves on the back while they plan to take over the food supply, making the masses indentured servants to their poison food chain. The people need to fight back, now. Soon it will be too late. Did you know that the Rockefeller family, the GO giants, and Bill Gates have seed vaults on the Barents Sea near the Arctic Ocean, some 1,100 kilometers from the North Pole to protect them from the GMO war on the food supply?

But at least not everyone is excited about the chosen recipients receiving this glorification. In response to the awards (or at least Robert T. Fraley’s award) , 81 Councillors of the World Future Council says this year’s World Food Prize recipient “betrays the award’s own mandate to emphasize the importance of a nutritious and sustainable food supply for all people.”

THE WORLD FOOD PRIZE SINCERELY THANKS the following sponsors for supporting its annual programs:

While the GMO corporations plan to poison us, they are stocking away heirloom seed to make sure their families live on. It’s pathetic. Congratulations on the World Food Prize, but we are on to you. Plans to reduce our fertility and give us cancer with GMO will be thwarted.