Beyond Deterministic Genes: The Morphogenetic Field 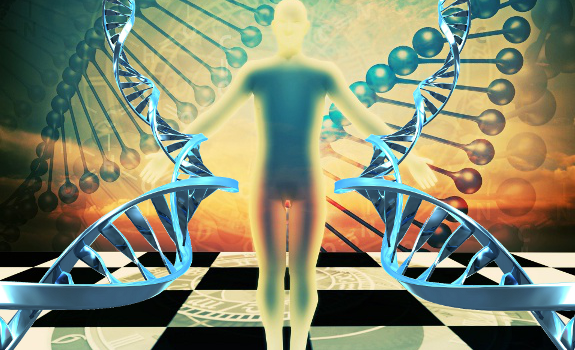 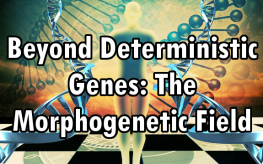 Our genes have long been ballyhooed as either a death-sentence or the Midas touch of genius, bestowing upon us pristine health and an agile mind, or the deterministic outcome of cancer, neurological disease, or various other birth defects. But what if there was something else helping to determine our fate?

What if our genes were merely building blocks, and a greater intelligence was in charge of whether or not we can throw a basketball from the free throw line and get nothing but net every time, or die at the age of 46 like every other person in our family’s history, due to a genetic predisposition for cardiac arrest?

Do Genes Make the Man – Entirely?

Genetic determinism is the idea that genes, to the exclusion of environment or the field of our awareness and experience, determine how an organism turns out. You could call it the extreme version of nature vs. nurture, wherein our DNA tells us everything about what something will be.

The aforementioned idea decides that generational programming accounts for everything. We’ve become so obsessed with genes, in fact, that we test for everything – from BRAC1 and BRAC2 genes for breast or ovarian cancer, to simply testing our DNA for clues into our ancestral roots. It isn’t as though this information isn’t useful, or even fun, but it can be deceptively limiting.

While we can learn if our great-great grandparents were likely to fish or have red hair, we can also find less savory ‘genes’ that foreshadow more somber outcomes.

One of the biggest intellectual roadblocks to overcome in healing ourselves, or even understanding the Universe fully, is based on this assumption: that our genes determine our reality, or the likelihood our lives and health will follow a predetermined path. This assumption is based on yet another erroneous fallacy – that we are just a combination of mechanical, chemical, and hormonal interactions – what Newtonian science would call ‘modern medicine.’

Even after mapping out 3.2 billion base pairs of DNA in the human genome project, we were no closer to figuring out how to heal aberrant DNA for one reason. While many scientists were looking at the four single letters in a protein recipe and how they carry out bodily functions, they forgot to make room for consciousness.

Instead of our lives being determined by our genes, they are more likely determined by what science now calls epigenetics. Our genes grow in a soup of resonant fields created by thoughts and intentions. Rupert Sheldrake, the noted biologist and author of over 80 scientific papers on the subject, has been railing against mainstream science, trying to break through its dogma on the subject for decades:

“Morphic resonance is a process whereby self-organising systems inherit a memory from previous similar systems. In its most general formulation, morphic resonance means that the so-called laws of nature are more like habits. The hypothesis of morphic resonance also leads to a radically new interpretation of memory storage in the brain and of biological inheritance. Memory need not be stored in material traces inside brains, which are more like TV receivers than video recorders, tuning into influences from the past.

Sheldrake calls this field, ‘the extended mind’.  He has defended his theory over and over again from people who call him a crackpot or a whack job. His latest book, Science Set Free, discusses his theory to great extent, but for now, we can discuss it summarily.

Dr. Bruce Lipton, a controversial biologist, has pointed out that one set of gene blueprints can result in over 30,000 different possible outcomes. In multiple adoption studies conducted in the 1880s and 1990s, it was found that children in the same family have an important causal role in gene expression, regardless of their biological origins.

Genes Are Only a Piece of the Puzzle

Researchers found that even children who did not have particular gene combinations that would predispose them to certain types of cancer – but were adopted into families that had attitudes or prevalent emotions that resulted in this health outcome – also often developed the same cancers as their host families did. Social context also played a significant role in whether these adopted children developed a disease. It was surprisingly uncommon for the genes themselves to play out deterministic health scenarios.

Genes are not locked into a specific code. Gene activity can change on a daily basis, and does. The heretofore accepted scientific paradigm of genetic determinacy is being turned on its head. As Lipton explains in a lecture:

“The name protein means ‘primary element’ (proteios, Gr.) for proteins are the primary components of all plant and animal cells. A human is made of ~100,000 different proteins. Proteins are linear ‘chains,’ whose molecular ‘links’ are comprised of amino acid molecules. Each of the 20 different amino acids has a unique shape, so that when linked together in a chain, the resulting proteins fold into elaborate 3-dimensional ‘wire sculptures.’ The protein sculpture’s pattern is determined by the sequence of its amino acid links.

The balancing of electromagnetic charges along the protein’s chain serves to control the ‘final’ shape of the sculpture. The unique shape of a protein sculpture is referred to as its ‘conformation.’ In the manner of a lock and key, protein sculptures compliment the shape of environmental molecules (which include other proteins). When proteins interlock with the complementary environmental molecules, they assemble into complex structures (similar to the way cogged ‘gears’ intermesh to make a watch).”

This and other discoveries made in the last hundred years have allowed scientists willing to go against mainstream to understand that the ‘primary components’ of life are still orchestrated by something more.

The morphic resonance theory postulates that we are bound together even though we appear separate, and it is in this field that communication (among cells, DNA, particles, etc.) takes place. While Newtonian science explained the theory of gravitation, outlining the invisible force which holds all things together, the same scientific reasoning also tended to divide everything into separate, mechanistic, material categories. Why is an apple different than a tomato, or a bee different from a persimmon flower? How does the DNA know to make a tree or an ant? A human being or a salamander?

The word ‘morphic’ comes from the Greek meaning ‘form,’ and the morphogentic field determines how things take form. It doesn’t just organize living things, but also inanimate, non-sentient matter. While genes play an important part in organizing us into things, they don’t explain how the organization itself happens. After all, apes and humans, fruit flies and worms are all very similar, genetically.

The theory of morphogenesis supposes that something imposes a pattern of organization on a field – producing specific outcomes in matter. These fields are not fixed; they evolve. This is part of the reason you can see a child that doesn’t have cancer in her genes develop cancer when she is exposed to a ‘field’ which consistently creates the disease. It is also why some people with cancer-causing genes don’t get cancer at all. Sheldrake thinks these messages in the field are passed down through a ‘non-local’ resonance, but ancients called this consciousness.

In another interesting experiment conducted recently, two bilaterally symmetric eyes arise from the anterior neural plate in vertebrate embryos. Those pose an interesting question – did both eyes share a common developmental origin or did they originate separately? Does all of nature spring forward in a ‘Big Bang’ moment, or does it exist as merely a possibility in a metaphysical realm waiting to become ‘real.’

Whatever is discovered to be the underlying cause, or pattern of development, it has been noted that morphic fields of social groups connect group members – even when they are far away – and provide channels of communication through which organisms can communicate at a distance, affecting the genome. This is also the foundation of distance healing, and may even possibly explain how entire forests communicate beyond the network of fungi found on a forest floor. In more than 61 studies on distance healing along with 120 additional randomized controlled studies involving thousands of miles of geographic distance, DNA changes as well as spontaneous healings occurred repeatedly.

DNA may be Fixed, but Epigenome is Flexible

It turns out that our DNA code is fixed for life, but the epigenome is flexible. Epigenomes react to signals from the outside world, such as diet and stress. Even in differentiated cells, signals fine-tune cell functions through changes in gene expression. A flexible epigenome allows us to adjust to changes in the world around us, and to learn from our experiences. This happens both singularly and collectively.

Epigenome signaling can happen from inside a cell, from neighboring cells, or from the environment entirely outside the cell.

To summarize: eat right, create a loving, peaceful environment, and challenge your societal assumptions if they don’t serve you. Your genes could very well be changed in the process.