Anti-Monsanto Articles Surpasses 225,000 Facebook Shares, Among Most Shared in 2011

An article I wrote several months ago entitled Hungary Destroys All Monsanto GMO Corn Fields has reached, at the time of writing, over 84,000 Facebook shares. Beating out even mainstream publications like CNN and the Huffington Post, the anti-Monsanto article summarizes how the nation of Hugary destroyed 1000 acres of maize found to have been grown with genetically modified seeds, according to Hungary deputy state secretary of the Ministry of Rural Development Lajos Bognar. The massive success of the article is due to the activism of health conscious readers like you, who spread this vital information across the web.

The shares are so massive that the article is actually among the top 40 most shared articles of 2011, as reported by Facebook. Number 10, a Huffington Post article entitled “New Zodiac Sign Dates: Ophiuchus The 13th Sign?” weighs in at 81,160 shares, which the Hungary article has surpassed. In fact, the article has increased by around 20,000 shares per day and may very well climb up much further on the list.

The real question is, even if the article climbs to 100,000 shares, will Facebook acknowledge the anti-Monsanto article? You will notice that the articles that appear on the list are all from mainstream media sources, most on non-crucial issues like “What teachers really want to tell their parents” and others. If this anti-Monsanto article featured on an alternative news website were to appear on the list, it would be sure to create some waves.

Hungary Destroys All Monsanto GMO Corn Fields crushing Huffington Post’s #9 most shared article of 2011 with over 83,000 shares and rising: 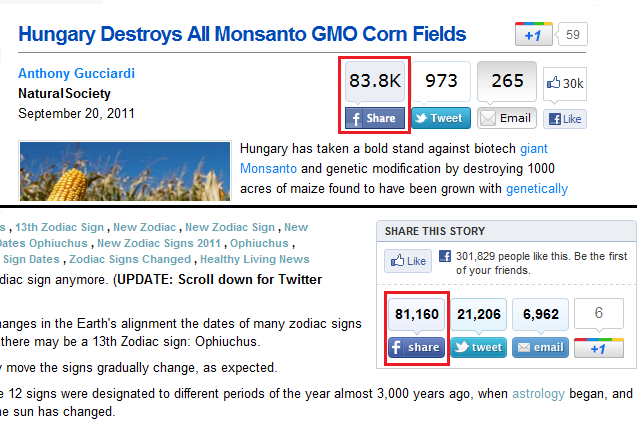 You may notice the editor’s note at the end of the article stating “This article is from July 26, 2011, but had to be re-added.” The Hungary article, now among the most shared of 2011, was actually deleted from our old server after it was attacked by a group of individuals who deleted a single article — Hungary Destroys All Monsanto GMO Corn Fields. Back when it was first posted, it was quickly generating shares (nothing near 80,000), and was one of our most popular articles. After the attack, the article was corrupted, deleted, and was out of commission for quite some time.

After upgrading our servers and security, further attempts have failed to corrupt or delete any content on our website. While the attacks may not have been attempts to censor the quickly-growing topic from the web, the interesting past of the article is important to note.

The massive amount of shares that this article has generated has allowed for countless individuals to learn about genetically modified foods, Monsanto, and the entire nutritional paradigm. Readers like you have catapulted this vital informational superbomb into the mainstream lens, and Facebook and others may soon have to recognize it as one of the defining stories of 2011. With a topic much more important than cute animals and Facebook changes, Hungary’s stand against Monsanto is truly defining in modern history.

It is this same desire to bring this information into the mainstream media that inspired us to declared Monsanto the Worst Company of 2011, unleashing a press release on the subject to over 5,500 mainstream publications. Amazingly, the story was picked up by Reuters, Yahoo, and hundreds of other top websites. With Yahoo alone receiving around an estimated 67,604,000 visitors per day, it is easy to see how this information can truly shape the public view on genetically modified ingredients through large-scale dissemination of pertinent information and research. 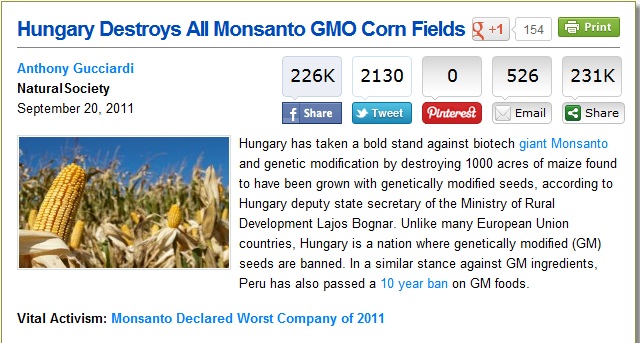 I would like to congratulate everyone in being part of this information revolution, as the power of the alternative media and activism is demonstrated to the entire globe through achieving record share numbers without mainstream media support or outside funding.

7 responses to “Anti-Monsanto Articles Surpasses 225,000 Facebook Shares, Among Most Shared in 2011”