When prepared right, artichokes can be delicious – this is no secret. But what many people aren’t aware of is that the spiny globes (actually called “globe artichokes”) pack quite a nutritious punch. Below you will learn of 8 artichoke health benefits that will keep you coming back for that delicious heart.

Artichokes are in the thistle group of the sunflower family. They’re not really a vegetable, per-se…they’re actually flower buds. Dating back to 371-287 B.C., artichoke are steeped in legend. Long before they were turned into cheesy dips and placed on the appetizer menus of chain restaurants, ancient Greeks and Romans considered the bulbs a delicacy and an aphrodisiac.

It seems the ancients were onto something.

A single artichoke contains about 10 grams of fiber, which accounts for approximately 14 percent of one’s daily fiber needs. [1]

Artichokes have about 60 calories. [1]

4. Chock Full of Vitamins and Minerals

Artichokes are an excellent source of dietary magnesium, trace mineral chromium, vitamins K and C, folic acid, biotin, niacin, riboflavin, thiamine, potassium, the trace mineral manganese, and a carbohydrate that is in the form of insulin. [1]

The vitamin C found in artichokes are so powerful that the Oxygen Radical Absorbance Capacity (ORAC) system – which rates foods based on their antioxidant capacity – has given this food a score 9 times higher than other antioxidant-rich foods. Antioxidant-rich foods are known to fight off free radical cells that damage cells and have destructive effects on the body.

6. They Relieve the Pain of Indigestion

Research shows that those who suffer from acid reflux or indigestion pain find relief in consuming artichokes. Members of some European scientific advisory boards have authorized the use of artichokes to help people who struggle with everything from mild diarrhea and nausea, to bloating and stomach pain.

Artichokes contain compounds that play a vital role in reducing cholesterol in the blood. 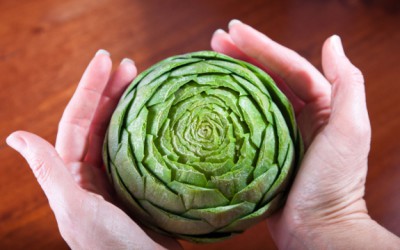 The vitamin K found in artichokes has been linked to facilitating brain health by reducing damage to its neurons, and may help patients with Alzheimer’s disease. Artichokes also act as a vasodilator, with properties that expand blood vessels, allowing more oxygen to reach the brain. More oxygen in the brain translates into improved cognitive abilities.

Finally, artichokes help poor liver function, which can help with lowering cholesterol levels; arteriosclerosis; gout; the treatment of hepatitis and gall secretions, and lowering blood sugar, just to name a few other artichoke health benefits. They have also been shown to fight pancreatic cancer.