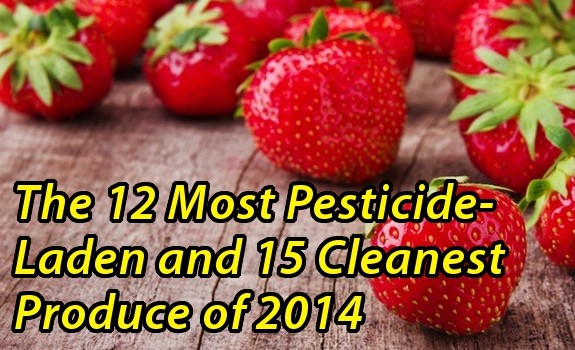 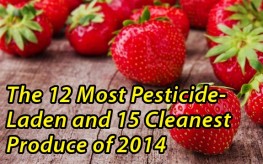 It is no secret that conventional produce is soaked with health- and environmentally-hazardous pesticides. Unless you’re going organic, every fruit and vegetable you buy comes with a dose of poisonous chemicals, though not all produce suffers from the same level of toxicity. This is why the Environmental Working Group releases a list of the 12 most pesticide-laden fruit and vegetables every year, along with the 15 cleanest. Now the organization released the 2014 version of it’s ‘Shopper’s Guide to Pesticide in Produce’.

Pesticide exposure is a major concern today. Passed in 1996, the Food Quality Protection Act led to a dramatic improvement in protecting the public from toxic pesticides. The Environmental Protection Agency has been responsible for protecting the masses, especially children, from harmful levels of pesticide for about 2 decades. But that wasn’t enough. Today, over 1 billion pounds of pesticides are used in the United States alone every year, leading to numerous health and environmental consequences.

Among the many negative effects of pesticides, research has found that these chemicals can lead to cancer, birth defects, infertility, kidney failure, and much more. Monsanto’s Bt toxins are killing human embryo cells, while RoundUp and glyphosate are leading to a kidney disease epidemic in poor farming regions. It is for these reasons, among others, that individuals are looking to buy produce free of pesticides; it is also one of many reasons people oppose GMO crops, which require more pesticides than you can imagine.

But even then, not everyone wants to spend more than needed on healthful, organic food. Well, now you can choose to go organic when selecting the most toxic of produce, and stick with conventional when shopping for something on the ‘Clean Fifteen’ list. Here are the ‘Dirty Dozen’ and ‘Clean Fifteen’.

The Environmental Working Group found these 12 pieces of produce to be most toxic:

The EWG found that the produce listed below are the least likely to hold pesticides residues, and have tested low for total pesticide concentration:

“EWG’s Shopper’s Guide helps people find conventional fruits and vegetables with low concentrations of pesticide residues,” said Sonya Lunder, EWG’s senior analyst and principal author of the report, adding, “If a particular item is likely to be high in pesticides, people can go for organic…For decades, various toxic pesticides were claimed to be ‘safe’ — until they weren’t, and either banned or phased out because they posed risks to people. While regulators and scientists debate these and other controversies about pesticide safety, EWG will continue drawing attention to the fruits and vegetables with the highest pesticide loads.”

Other findings in the EWG report include: