If your significant other hands you a box of chocolates, your heart might skip a beat; but that’s pretty much the only time you want to feel your heart flutter. Even sweeter, eating what’s in that box may protect you from a dangerous form of heart palpitations called atrial fibrillation, a study shows.

Published in May of 2017 in the journal Heart, the study found that adults who ate chocolate 1-3 times per month were 10-20% less likely to suffer from atrial fibrillation, or AFib, than those who snacked on chocolate once a month or less. [1]

Discovering the Heart-Healthy Properties of Chocolate

Researchers looked at long-term data regarding the diets of more than 55,500 men and women aged 50-64 years old in Denmark. The participants submitted information relating to their eating habits upon entering the study, between 1993 and 1997.

Many of the health benefits associated with chocolate are found in dark chocolate, but most people in Denmark consume milk chocolate. The researchers said they weren’t sure they’d find such a large reduction in AFib risk among the population. [2]

Elizabeth Mostofsky, an epidemiologist at the Harvard T.H. Chan School of Public Health and one of the leaders of the study, said:

“We were pleasantly surprised that — despite the fact that most of the chocolate may have [had] relatively low cocoa concentrations — we were still able to see robust findings.” [2]

However, the amount of cocoa in chocolate varies significantly between the U.S. and Denmark. In the United States, milk chocolate must contain 10% cocoa solids – the suspected beneficial ingredient, compared to Denmark, where the sweet treat is required to contain 30%. [3]

The study’s authors note in an editorial published alongside the research that chocolate lovers had fewer cases of hypertension and diabetes, and had overall lower blood pressure – all factors that could help explain why those same individuals were less likely to develop atrial fibrillation. [2]

Atrial fibrillation is believed to be caused by the release of certain molecules that damage heart tissue. Chocolate contains flavanols that can ward off the type of inflammation that can lead to tissue damage. Furthermore, flavanols may counteract the clots that could form when an irregular heartbeat allows blood to pool in the heart. [3]

Past studies have shown that eating chocolate can reduce the risk of suffering a heart attack, as well as lower blood pressure and even prevent obesity. 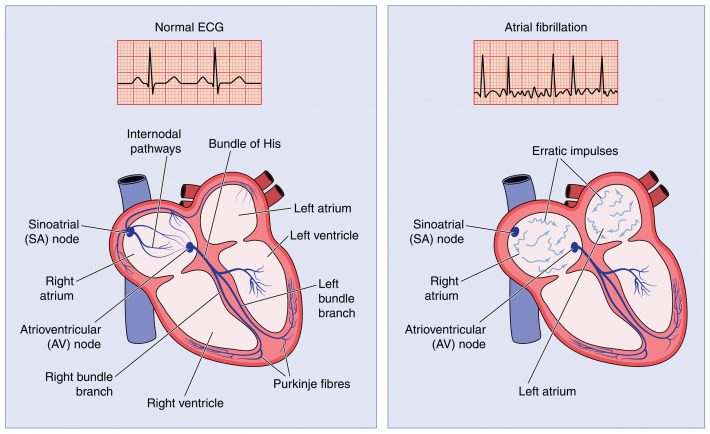 Atrial fibrillation is a quivering or irregular heartbeat, according to the American Heart Association. The condition can lead to blood clots, stroke, heart failure, and other heart-related complications.

Read: Know the Causes and Symptoms of Atrial Fibrillation

A healthy heart normally contracts and relaxes to a regular beat. However, in people with AFib, the upper chambers of the heart (the atria) beat irregularly (quiver) instead of maintaining a regular beat to effectively move blood into the ventricles. [4]

Many people with atrial fibrillation are unaware that they have it; yet it affects more than 33 million people worldwide, and an estimated 25% of adults will develop the heart condition sometime in their lifetime, the accompanying editorial states.