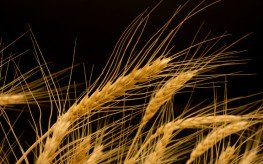 The agency notorious for supporting GMO juggernaut Monsanto has issued a deeply concerning alert regarding the illegal and unexpected spread of Monsanto’s genetically modified glyphosate-resistant wheat. Found in farmland within the state of Oregon, the USDA is now admitting that we may have a very serious case of GM crop pollution — and that really concerns me coming from a company that backs Monsanto 365 days a year.

In fact, we’re talking about the United States government, a government that uses taxpayer dollars to fund Monsanto’s ventures overseas and advertise their services. As hundreds of cables reveal from WikiLeaks, the United States State Department went as far as to purchase promotional DVDs and pamphlets for Monsanto in order to help generate business in foreign nations. And if the countries rejected Monsanto’s disease-linked crops, or even decided to go with competitors, then ‘military-style trade wars’ are used to change the minds of nation officials.

In the report by the USDA on the GM pollution, which details how experimental GM wheat (which stems back to testing between 1998 to 2005) has been found outside of the designated testing areas:

The U.S. Department of Agriculture’s (USDA) Animal and Plant Health Inspection Service (APHIS) announced today that test results of plant samples from an Oregon farm indicate the presence of genetically engineered (GE) glyphosate-resistant wheat plants. Further testing by USDA laboratories indicates the presence of the same GE glyphosate-resistant wheat variety that Monsanto was authorized to field test in 16 states from 1998 to 2005.

And while the report understates the severity of the issue by far, it’s extremely interesting to see the USDA actually state that this is a major concern for them. I mean we’re talking about an agency that not only went ahead and approved Monsanto’s genetically modified creations without hesitation or substantial testing (and continues to uphold their safety despite over 30 peer-reviewed pieces of research linking Monsanto’s Roundup to conditions like lymphoma and cancer), but has openly announced that Monsanto is set to receive special ‘speedy approval’ for all new genetically modified endeavors.

That’s in addition to pushing for the complete release of genetically modified salmon with a $500,000 grant to the company responsible for production. So why are they so concerned, or at least voicing concern? Also, let us consider the fact that the USDA completely failed to act on previous GM pollution that I revealed back in May of 2012.

History Repeats: I Exposed Monsanto GM Pollution In May 2012

Back in 2012 I published a piece based on exclusive documents I acquired that detailed the illegal presence of genetically modified alfalfa being shipped to organic farms. In the letter we obtained from Cal/West Seeds, it is clearly written that the Roundup Ready gene was unintentionally present in the conventional alfalfa seeds tested. Further evidence reveals that Monsanto’s genetically altered alfalfa may have been set free in 2003 — a full two years or more before it was deregulated in 2005.

The letter, which the USDA completely ignored, reads:

We first discovered the unintended presence of the Roundup Ready gene in our conventional alfalfa seeds in 2005. It was identified in one of our foundation seed production lots grown in California. We tested the foundation seed lot priot to shipping it to a producer who intended to plant it for organic seed production.

The seed was intended to be certified organic and shipped off to organic farmers — seed that was secretly genetically modified.