The U.S. Centers for Disease Control and Prevention (CDC) offered some good news on November 8 when it released data showing that smoking rates in the U.S. are the lowest they’ve ever been. Unfortunately, there was some bad news to go with it. 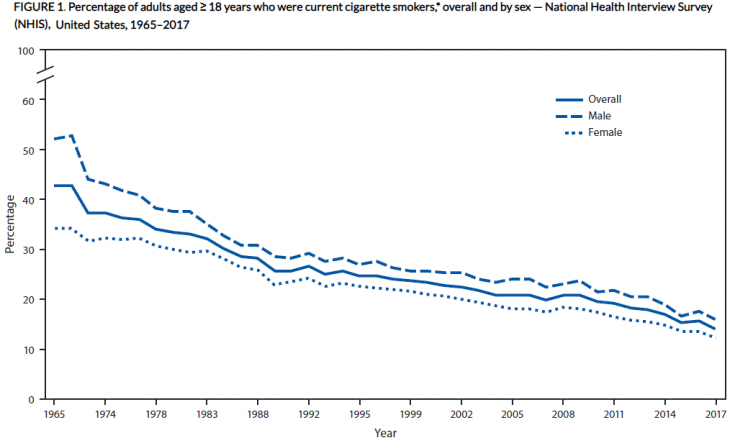 “This new all-time low in cigarette smoking among U.S. adults is a tremendous public health accomplishment – and it demonstrates the importance of continued proven strategies to reduce smoking. Despite this progress, work remains to reduce the harmful health effects of tobacco use.”

While smoking rates fell, other forms of tobacco use remain prevalent, including e-cigarettes, hookahs, cigars, smokeless tobacco, and water pipes. About 47 million Americans use tobacco in some form.

When adding those other categories, 16.2% of adults, or 47 million people, used tobacco products of some kind in 2017, according to the CDC. The second-most used products behind cigarettes were cigars, cigarillos or filtered little cigars, with 3.8% of adults (9.3 million people) saying they used them. [2]

E-cigarettes have been touted as a smoking cessation method, and many people swear by it. However, overall, the nicotine delivery devices have proven to be more harmful than helpful.

Brian King, a deputy director in the CDC’s office on smoking and health, said:

“If e-cigarette use was responsible [for declines in cigarette use], you would expect to see a perfect correlation, but that’s not what we’re seeing. If anything, e-cigarettes have complicated the tobacco product landscape.”

The CDC says in the report that certain groups of people were more likely to use tobacco than others, including: [1]

Among ethnic groups, non-Hispanic American Indian/Native Americans, multiracial Americans, and white or black adults were the most likely to use tobacco.

Adults who identified as lesbian, gay, or bisexual were also more likely to use, as well as those who were divorced, separated, widowed, single, never-married, or not living with a partner.

Adults living in the Midwest or the south tended to use tobacco the most.

Have you started to see a pattern yet? In many cases, tobacco users tended to be those facing hardship and stress. Indeed, the CDC mentioned in its report that psychological distress was associated with an increase in tobacco use, with 40.8% of adults who reported distress saying they used tobacco compared to 18.5% who reported not being severely distressed.

“For more than half a century, cigarette smoking has been the leading cause of cancer mortality in the United States. Eliminating smoking in America would, over time, eliminate about 1/3 of all cancer deaths. The persistent disparities in adult smoking prevalence described in this report emphasize the need for further research to accelerate reductions in tobacco use among all Americans.”

FDA Commissioner Scott Gottlieb said he was encouraged by the findings and said the FDA is committed to accelerating declines. [3]

“We’ve taken new steps to ultimately render combustible cigarettes minimally or non-addictive and to advance a framework to encourage innovation of potentially less harmful products such as e-cigarettes for adults who still seek access to nicotine, as well as support the development of novel nicotine replacement drug therapies. At the same time, we’re also working to protect kids from the dangers of tobacco product use, including e-cigarettes.”

In September, the agency warned 5 e-cigarette makers, including Juul, that they had 2 months to prove to the FDA that they’d taken steps to prevent the sale of their products to young people.

The companies were told that their failure to do so could result in the agency requiring them to change their sales and marketing practices, stop their distributing of products to retailers who sell to kids, and the removal of flavored e-cigarettes and nicotine products from the market.

Then, in early October, the FDA raided the Juul offices and confiscated thousands of documents as part of its effort to pressure the company into doing more to keep its products out of the hands of young people.

Juul e-cigarettes, which look like USB drives, are extremely popular among high-schoolers. The devices come with pods filled with nicotine liquid that is available in 6 flavors. Each pod delivers as much nicotine as up to 2 packs of cigarettes. [4]