SUBOXONE: The Psych Drug Behind The Charleston Church Shooting?

On February 28, Roof was arrested for drug possession at a mall in Columbia, where he was searched by officers after storekeepers complained that he was acting unusually and asking questions about opening hours and the number of staff on the premises. The Wall Street Journal reports a police incident document said Roof was found to have strips of Suboxone, a pain drug sometimes used to treat opiate addiction. He did not have a prescription for the drug, which is commonly sold illegally on the street.
(Source: The Daily Beast)

Suboxone is a powerful psychoactive drug which is utilized in breaking heroin and narcotic pain reliever addictions. Just like methadone,* suboxone has its downside risks and adverse side effects. It is a medication which contains two primary ingredients — buprenorphine and naloxone. Buprenorphine is a synthetic opiate; naloxone is drug that blocks feelings of euphoria.

*Methodone is such a dangerous drug that dedicated clinics were set up around the country because patients could not be trusted with more than one day’s dose at a time; hence, the daily visit to the methadone clinic. Methadone is actually more dangerous than all prescribed narcotic painkillers and can threaten a patient’s life with each dose. As a matter of fact, a methadone user doesn’t have to be addicted to methadone to die from it—the very first dose can kill, unlike both heroin and morphine (this last claim has been legitimately questioned by some).


These two ingredients — buprenorphine and naloxone –work in tandem assisting the addicted drug user in their intention to break a very strong habit.  Like any drug that can successfully replace heroin, it is quite powerful and has some serious side effects. Just how does it work?

Buprenorphine is an opioid partial agonist. This means that, although buprenorphine is an opioid, and thus can produce typical opioid agonist effects and side effects such as euphoria and respiratory depression, its maximal effects are less than those of full agonists like heroin and methadone. At low doses buprenorphine produces sufficient agonist effect to enable opioid-addicted individuals to discontinue the misuse of opioids without experiencing withdrawal symptoms. [1]

As for adverse side effects, there are many and they can be severe. It has been reported that violent outbursts and aggressive acts of rage can be experienced while under the influence of Suboxone. There are other extreme and significant behavioral outcomes which can be exhibited by those who are under the influence of Suboxone which fit with the violent acts of the Charleston shooter. 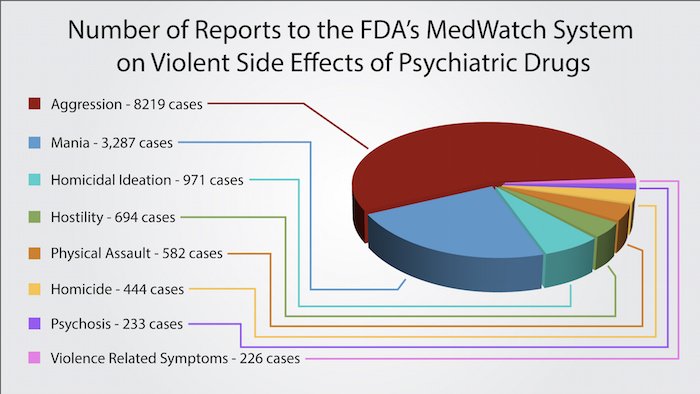 The bottom line here is that powerful psychoactive and/or psychotropic drugs can push young people into all sorts of highly anti-social and destructive behavior. The presence of these drugs is rarely, if ever, discussed in the mainstream media in the wake of events like Charleston. The focus is always on the usage of a gun(s), rather than the radically altered state of mind of the shooter.

The following article link contains a compilation of similar shootings and spells out a compelling narrative which seems to prove the direct influence of psychotropic drugs in these shocking episodes. It also points directly to the fundamental responsibility that ought to be shared by those pharmaceutical companies which manufacture and distribute these dangerous drug medications.

This investigative study provides an indisputable body of scientific evidence which clearly points to a causal relationship between various psych drugs and extreme violence. What is particularly curious is why the government never addresses these quite obvious correlations. Instead, the authorities only speak to the utilization of a gun in the commission of the crimes.

Perhaps the time is now to shift attention to the dangerously mind-altering pharmaceutical drugs which regularly trigger this unacceptable conduct. The guns will always be there, just as knives will always be available. Therefore, only by addressing the root causes will this epidemic of shootings be brought to an end.

Any drug that has such profound effects on the mind and emotions, like Suboxone or Methadone, ought to be officially classified as a psych drug. Just because they are used specifically to wean patients off of hard drugs like heroin, morphine and other highly addictive painkillers does not mean they don’t have serious side effects.

The intention of this article is to point out that any powerful psychoactive drug like Suboxone can, and does, have detrimental side effects.  Especially if they are abused, or taken while using other psychotropic drugs like Cocaine and LSD and Crystal Meth, are the effects that more unpredictable or even unknown for any given individual.  When these drugs are taken while drinking alcohol, the number of adverse side effects grows even larger and more serious.

The focus of this post has been on younger people because they often don’t know what they’re doing with regard to recreational drug-taking.  Many are in a dangerous and risky experimental mode; hence, our purpose is to make them aware of the inherent dangers and unknown risks associated with mixing drugs, particularly mixing them with alcohol.

Taking too much Suboxone can have disastrous consequences for any individual with a predisposing vulnerable biochemistry, especially when they drink and mix with other powerful psychoactive drugs.  The scientific literature is full of research studies which have demonstrated how harmful drug interactions are the number one cause of iatrogenic deaths in America.  Likewise, illicit drug interactions have an even higher rate of fatalities (See reference below).

Roof was arrested Feb. 28 at the Columbiana Mall in Columbia, SC, after store workers called police, saying he was asking suspicious questions about store hours and staffing. Police found Roof with Suboxone, a synthetic dug linked to aggressive behavior; Radar Online reported police also found cocaine, LSD, and methamphetamine. Banned by the mall for a year, he reappeared there two months later and was arrested for trespassing. [2]

[1] The National Alliance of Advocates for Buprenorphine Treatment

15 responses to “SUBOXONE: The Psych Drug Behind The Charleston Church Shooting?”