The Foods that Protect Your Eyes, Help Prevent Macular Degeneration

Carotenoids may be key to eye health

Many of us remember (or still watch!) the old Popeye cartoons where the title character would instantly gain much greater physical strength by eating a can of spinach. But did you know that it could also build the strength of the macular pigment, a shield against vision loss? 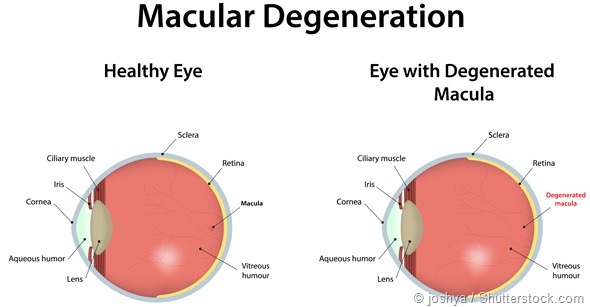 Macular degeneration is a common age-related complaint, partly because the macula in the center of our eyes can easily become damaged by prolonged bright light exposure, or looking directly at strong light sources such as the sun, without protection.

The risk of this damage, however, can be reduced by increasing the amount of yellow pigment that shields the macula primarily from “blue” light. This blue light is the dominant type of light emitted by computers and many TVs, and is one part of sunlight.

The yellow pigment that protects the macula from blue light is made of three carotenoids: lutein, zeaxanthin and meso-zeaxanthin. Zeaxanthin is 75% of the pigment in the central area of the macula, while lutein makes up two-thirds of the macular pigment towards the edges. This pigment can wear down with age, possibly due to poorer digestion, or from poor dietary intake of these three carotenoids.

The thickness of this pigment, measured as Macular Pigment Optical Density, can be measured in an optometrist’s office, and is scored from 0 to 1. Less than 0.21 is considered to be “low”, 0.22-0.44 is medium, and 0.45-1 is “high,” and the healthiest range. A thicker pigmentation can not only protect against macular degeneration, the most common form of blindness, but also prevent photosensitivity, help us see at night and improve vision in natural environments.

So in theory, carotenoids may protect against blindness, but what about in practice?

How Carotenoids Help with Eye Health

In a Japanese study (Ozawa et al. 2016), 11 healthy non-smokers had their macular thickness and vision (as visual acuity) tested, then were instructed to eat 75 grams of frozen spinach, containing 10mg of lutein, every day for two months. At both one and two months, visual acuity and macular pigment density were significantly increased, and higher blood levels of lutein helped to confirm the relationship.

Despite appearances, spinach is a source of yellow carotenoids, but the green chlorophyll overpowers the yellow pigmentation.

Additionally, a study testing the effect of kale extract on 20 patients with macular degeneration also found a significant increase in pigment density. After stopping the extract, macular pigment density dropped, showing the importance of regularly eating these foods. Like the previous study, the amount of lutein in this extract was also 10mg, and was accompanied by 3mg of zeaxanthin.

Meso-zeaxanthin may strengthen the effects of lutein and zeaxanthin, with a trial involving patients with early age-related macular degeneration (AMD) showing greater improvements in pigment density and contrast sensitivity, and continuing improvement in the second and third year of supplementation. No supplemented patients progressed to AMD.

As for prevention, a meta-analysis of research on carotenoid consumption and AMD found a 26% reduced risk of AMD in those consuming the highest levels of carotenoids compared to those with the lowest intake.