Previously, signing up to be an organ donor involved going to the DMV and signing up in person. Recognizing that hundreds of thousands of people are waiting for organ donations and may not survive until their name comes up, Apple has introduced what they hope might alleviate some pressure on the situation. This fall, Apple will release the operating system iOS 10 for the iPhone, which will allow users to sign up to National Donate Life Registry directly on their phone without ever leaving their home.

Although over 120 million people in the United States are registered organ donors, the issue of finding matches and largely having to wait until someone passes away creates a big void that can cost some patients their lives. Apple hopes that this move will help shorten the waiting list for organ donation.

CEO Tim Cook was inspired to integrate the software into the new operating system after seeing Apple co-founder Steve Jobs deteriorate as he waited for a liver transplant. When Jobs finally received his transplant, he was able to extend his life by a couple of years.

However, the transplant waiting list was so long in California that doctors advised him he wouldn’t live long enough to receive one. Taking their advice, he was put on the registry in Tennessee, where he finally became eligible for the life-saving operation. (Though there are some grey areas revolving around this situation, which you can read about in the previous link.)

Cook, who offered to donate part of his own liver to Jobs, said:

“Watching and seeing him every day, waiting and not knowing — it stuck with me and left an impression that I’ll never forget.”

Apple released a Health app function to its famed iPhone in 2014, which not only allows users to track their health and fitness, but to have access to a digital Medical ID. This ID, which can be extremely useful to emergency medical responders, is available to access on a person’s phone even if the phone is locked. It allows an EMT crew to see a patient’s medication, medical history and blood type, which is especially useful when the patient is not responsive. 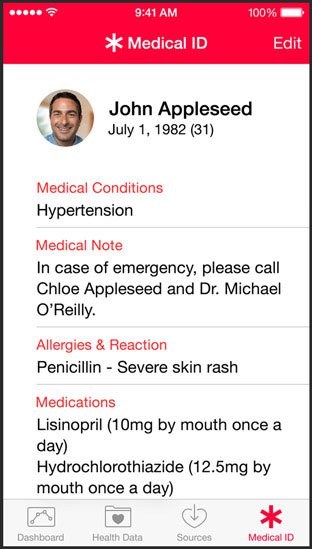 The new operating system will also allow doctors and responders to see whether or not a patient is a registered organ donor.