Eating pasta as part of the Mediterranean Diet

Pasta isn’t what you normally think of as a weight-loss food. Many distance runners and other athletes use pasta to load up on carbohydrates to give them fuel before a competition, but you don’t hear of people gorging on spaghetti in order to drop a few pounds for a wedding, unless it’s some crazy fad diet. Pasta’s image, however, may get a reboot from a new study by Italian researchers, who say pasta might help people lose fat.

What better country to study pasta than Italy, right?

Researchers Find No Link Between Pasta Consumption and Higher BMI

Don’t get too excited just yet, though; ordering an endless pasta bowl at a chain restaurant won’t make you svelte. Researchers at Istituto Neurologico Mediterraneo Neuromed I.R.C.C.S found no link between pasta consumption and higher body mass index (BMI) after examining the eating habits of 23,000 Italians who consumed the Mediterranean Diet.

For the study, published in the journal Nutrition and Diabetes, the researchers decided to take a closer look at the impact of pasta on body fat. While many studies have touted the health benefits of the Mediterranean Diet, which is rich in fruits, vegetables, and plant-based oils, the role of pasta in that beneficial effect wasn’t clear.

The team wanted to know…Is the Mediterranean Diet so healthy because it includes pasta, or is it healthy in spite of it?

Licia Iacoviello, one of the study’s authors, said:

“We’re talking about a fundamental component of Italian Mediterranean tradition, and there is no reason to do without it.” [1]

“We have seen that consumption of pasta, contrary to what many think, is not associated with an increase in body weight, rather the opposite. Our data shows that enjoying pasta according to individuals’ needs contributes to a healthy body mass index, lower waist circumference and better waist-hip ratio.”

Mediterranean Diet Thought to be Key 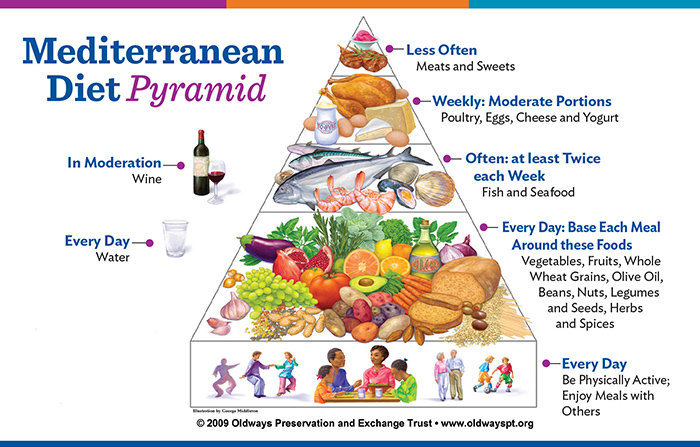 This is because people who ate pasta were more likely to strictly adhere to the Mediterranean Diet. Pasta was merely an aspect of an overall healthy eating pattern.

Licia Lacoviello, head of molecular and nutritional epidemiology at the Neuromed Institute, said the current trend of people cutting pasta out of their diets to shed weight is unjustified. She explained:

“In light of this research, we can say that this is not a correct attitude. We’re talking about a fundamental component of Italian Mediterranean tradition, and there is no reason to do without it.

The message emerging from this study, is that Mediterranean diet, consumed in moderation and respecting the variety of all its elements, is good to your health.”

The findings actually came from a project launched in 2005 that was intended to identify genetic factors underlying cardiovascular disease, cancer, and other conditions.

Dr. Gunter Kuhnle, Associate Professor in Nutrition and Health at the University of Reading, told The Telegraph the Italian researchers’ methodology appeared sound.

“In this context, it is however important to understand that pasta intake cannot be seen in isolation but that it is part of a dietary pattern.

In this study, people who consumed a lot of pasta also followed a traditional ‘Mediterranean diet,’ which is not surprising as the study was conducted in a Mediterranean population. Pasta intake could therefore be mainly a marker for adherence to this kind of diet.

Read: A Mediterranean Diet Could Cut your Risk of Breast Cancer

So, pasta shouldn’t be demonized, but that doesn’t mean you should fill up an entire plate full of fettuccine.

Survey participants were given picture booklets to help them report portion size. They generally consumed 3 ounces of pasta – less than a quarter of the standard box or package of pasta.