Scientists Figure out How to Transmit Thoughts Over the Internet

It starts with a simple 'yes' or 'no'

Researchers have figured out how to send thoughts over the Internet using a brain-to-brain connection and a huge magnet. What could go wrong?

It sounds kind of cool, at face-value: two people can play a game over the Internet by reading each other’s thoughts. They don’t have to look at each other, and they don’t have to talk to each other. The details of the experiment, and its findings, are published in the journal PLOS One:

“In the experiment, two participants (an ‘inquirer’ and a ‘respondent’) played a question-answering game similar to ’20 Questions.’ The respondent is given an object (e.g., ‘dog’) that is unknown to the inquirer and that the inquirer has to guess.

The inquirer asks a question about the object by selecting a question (using a mouse) from questions displayed on a screen. The question is then presented visually to the respondent through a web interface. The respondent answers ‘Yes’ or ‘No’” directly through their brain signals by paying attention to one of two flashing LEDs (‘Yes’ = 13 Hz; ‘No’ = 12 Hz).

The BBI uses EEG to decode the respondent’s answer, and a TMS apparatus to convey the answer to the inquirer by generating a visual percept through stimulation for ‘Yes’ and the absence of percept for ‘No.’ In the figure, the BBI system is highlighted in red.”

Researchers Andrea Stocco and Chantel Prat say the experiment shows it’s possible to take information from one person’s brain and stick it in another person’s brain without much communication at all.

The participants could only send “Yes” or “No” answers to one another, but they got the answers right an astonishing 72% of the time. That’s kind of incredible, considering the inquirer and the respondent were a mile away from each other during the experiment.

Researchers outfitted the respondent with a cap connected to an electroencephalograph (EEG), which picks up signals from the brain and records brain activity. The inquirer also wore a cap with a magnetic coil placed behind the area of the brain that controls the visual cortex. NBC News explains:

“The questioner sent one of the three questions to the respondent via computer, the respondent looked at the ‘yes’ or ‘no’ light, and that signal went back to the TMS machine. A ‘yes’ answer would elicit a strong TMS pulse, which creates a signal perceived by the brain as a pulse, a blob or a line called a phosphene.

A “no” answer sent a weaker signal, too low to create a phosphene.”

Stocco from UW’s Institute for Learning and Brain Sciences says:

“This is the most complex brain-to-brain experiment, I think, that’s been done to date in humans. It uses conscious experiences through signals that are experienced visually, and it requires two people to collaborate.”

Now the researchers are preparing to try to transmit more complex data. They believe the process could be used for “brain tutoring” – transferring signals from healthy brains to developmentally-impaired ones. They say it may also someday allow an alert individual to transmit his brain state to someone who has difficulty paying attention. [1][2] 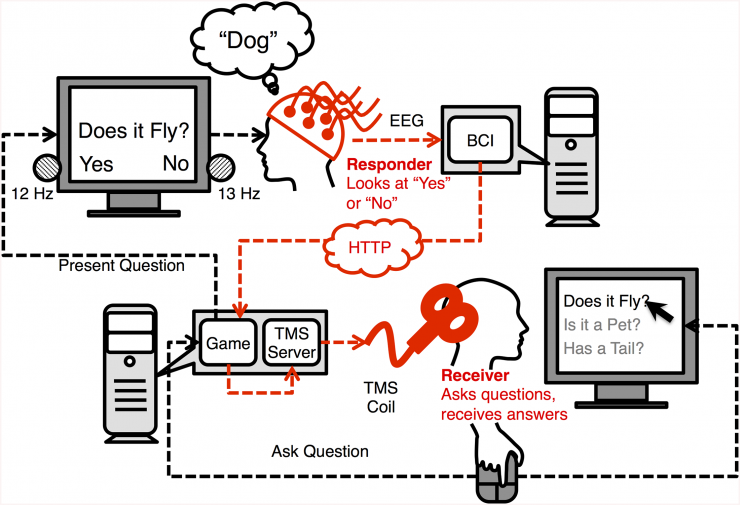 The possibilities are endless, both good and, well, terrifying. Iris-scanning technology is being utilized in our schools; we just found out that Twitter may not only read our private messages, but may alter them; some companies are requiring their employees to get microchips implanted; and the government can listen in on our cell phone conversations. Mind-reading could certainly be used for good, but the ways in which it could be misused are endless.

PBS reported in 2009 that the NSA was developing a device capable of gaining insight into what people are thinking. The author of the article wrote that “the system is so potentially intrusive that at least one researcher has quit, citing concerns over the dangers in placing such a powerful weapon in the hands of a top-secret agency with little accountability.”

PBS warned that it may someday be possible for people with nefarious intentions to not only know where you are and what you’re doing, but also what – and how – you’re thinking. [3]

And as The Atlantic once pointed out, mind-reading may one day make our rights virtually useless:

“Last year, a Maryland man on trial for murdering his roommate tried to introduce results from an fMRI-based lie detection test to bolster his claim that the death was a suicide. The court ruled the test results inadmissible, noting that the ‘fMRI lie detection method of testing is not yet accepted in the scientific community.'”

In a decision last year to exclude fMRI lie detection test results submitted by a defendant in a different case, the Sixth Circuit was even more skeptical, writing (PDF) that ‘there are concerns with not only whether fMRI lie detection of ‘real lies’ has been tested but whether it can be tested.'”

We can’t truly “remain silent” during an arrest if we are no longer entitled to our own thoughts, the article notes.