"The concern is we're going to create a monster..."

Researchers at the University of California San Diego and Sapphire Energy have successfully grown genetically modified algae outdoors for the first time. They claim that the GM algae don’t harm native algae populations and, moreover, can fend off deadly bacteria. [1]

Genetically modifying algae makes them grow more quickly. Scientists believe the technology could allow the creation of algae that produce more oil, which can then be used to make biofuels or biodegradable plastics. The genetically engineered algae also have the potential to be made more nutritious, to feed livestock or people.

Stephen Mayfield, a biologist at UC San Diego and co-author of the study, says:

“Every single organism that we use today to produce the food, feed and fiber that we use is genetically modified. This is true for both plants and animals. We did that through the process of domestication, in which we selected the mutations — genetic modifications — that produced the traits we wanted. That might have been larger ears of corns, or bigger soybean seeds, or even cows that produced milk longer.” [1]

According to Mayfield, in order to do the same with algae:

“we need to domesticate algae, similar to what we did with our crop plants and farm animals. [But] this could take decades and we still might not get what we want.” [1]

The ultimate purpose behind bioengineering algae, he explains, is to

“produce the products we need so that we don’t have to cut down our last rain forests, or take every fish from the ocean.” [1]

The doctored algae is viewed as a sustainable, renewable resource. 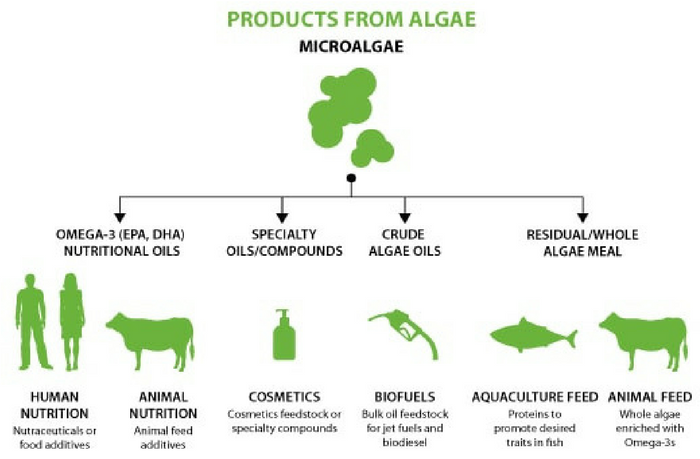 But this supposedly glorious research is occurring outside of adequate regulatory oversight and the EPA’s process of establishing and updating regulations for GE algae to protect human health and the environment (although the EPA did monitor the experiment). [1] [2]

Dana Perls, senior campaigner with Friends of the Earth, says:

“This study confirmed that genetically engineered microalgae grown in open ponds will escape and spread into the environment. Once this genie is out of the bottle, there is no way to put it back.

Not only is it impossible to contain GE algae in open air production, but there are currently no adequate regulations which fully address its risks to our environment, from lab to final product. Without this essential oversight, there should be no environmental release or commercial uses of GE algae and other synthetic biology organisms.” [2]

Microalgae reproduce rapidly, and engineered traits can quickly spread because of the plants’ horizontal gene transfer capabilities. Should those engineered traits fail to remain stable over time, there is a potential for the genes to spread rapidly out of control and change in unpredictable ways.

In the past, microalgae have produced toxic algae blooms, and there is no way of knowing whether GE microalgae are more harmful and difficult to control.

That’s the problem: Nobody knows.

“We are told that GE microalgae will not likely survive in the wild, but there is absolutely no basis for that assumption. In fact, many of the traits that are desirable for fuel and chemical production and industrial cultivation are precisely the traits that would lend a competitive advantage in nature.

Those include traits like ‘improved’ photosynthesis, resistance to predators and pests, hardiness and resilience that make them tolerant of industrial cultivation, or the ability to more effectively access and convert available nutrients.” [2]

The scientists’ experiment, funded by the Department of Energy, occurred over more than 50 days in huge outdoor tubs with water samples culled from five regional lakes. The GE strain of microalgae did spread to other tubs, presumably by wind and birds, but it “did not change the ecology in any way.” [1]


Mayfield says his team is being cautious:

“The first trial ran only 50 days, so there was little variation. We also only checked two genes, as we wanted to be very cautious with what we put outside. We need to repeat this test for a longer period of time, and we need to add additional genes to see how they behave under outdoor growth. We simply need a lot more data before we are ready to say that genetically engineered algae are safe and effective. This is step one of that process.” [1]

He also admits there is risk involved.

“Life is risky, and algae are no different than other organisms. But if we make the right changes, and then carefully measure their properties, we can easily manage the risk and develop the strain we need.” [1]

Jonathan Shurin, an ecologist at UC San Diego and a study co-author, says:

“The concern is we’re going to create a monster. [But] algae have been around for billions of years, and they’ve had long histories of evolution. If there was a super algae that could take over the world, it would have evolved by now.” [1]

“The tests performed by UCSD scientists were of very limited scope and little assurance that GMO microalgae are safe. Meanwhile, we need to ask ourselves: are these products worth the money and worth the risks to our health and environment?” [2]

Billions of taxpayer dollars have been invested in developing algae biofuels that have yet to be commercially viable, Friends of the Earth points out. Now the focus of GE microalgae research is on producing chemicals for use in cosmetics and as food ingredients.

Despite vast amounts of taxpayer dollars being funneled into Sapphire Energy for biofuel production, the company has been busily making algae-derived surfboards.

Another funding recipient, Solazyme, now known as Terravia, is focused on products like anti-wrinkle face cream.

[2] Friends of the Earth