Revealing Graphic Shows What Happens When You Drink a Coca Cola

The results are not pretty

Who hasn’t heard growing up that pouring a can of Coca Cola on car rust can literally remove it in no time at all? We’re not suggesting that Coke is a great rust remover, only that the urban myth was one of the most popular of the era.

Fast forward to 2015 and now we see that Coca Cola is getting another bad rap, only this time it’s the human body that is closely examined after a can of Coke is being poured down the gullet.

Because of the well-known ingredients in Coca Cola such as high fructose corn sweetener, sucrose in the form of refined sugar, phosphoric acid, caramel color, caffeine, coca extract, and glycerin, it’s easy to understand why it has various adverse effects on human health.

The sugar content alone puts a tremendous burden on the liver and the pancreas. The high-fructose corn syrup (HFCS) is especially damaging to human health because of the mercury content that HFCS now contains. The white refined sugar also has an addictive quality that keeps the drinker coming back for more when they’ve already had too much on a daily and/or weekly basis.

Phosphoric acid is strong enough to remove plaque from the circulatory system. However, it all depends on the delivery system, since when it is drunk in beverage form phosphoric acid will dissolve teeth, as well as leach minerals from bones over long term usage.

Caffeine has been proven to have deleterious effects on the adrenals, particularly for those with longstanding addictions to Coke.

Read: What Chemicals Are Really in Coke?

Caramel color has been identified as a potential carcinogen. Because it’s the most common coloring found in both food and drinks, Consumer Reports performed a series of tests to determine whether there was any appreciable risk of cancer associated with Coca Cola as well as the other brand name soft drinks.

While the tests came back with verifiable results regarding correlations between intake and cancer, it was clear that the daily intake of caramel color from all sources ought to be limited.

What Happens When You Drink a Coke?

The following graphic provides a breakdown of what occurs to the human body after various spans of time starting with 10 minutes and ending with 60 minutes.

“1. In the First 10 minutes: 10 teaspoons of sugar hit your system. (100% of your recommended daily intake.) You don’t immediately vomit from the overwhelming sweetness because phosphoric acid cuts the flavor allowing you to keep it down.

2. 20 minutes: Your blood sugar spikes, causing an insulin burst. Your liver responds to this by turning any sugar it can get its hands on into fat. (There’s plenty of that at this particular moment.)

3. 40 minutes: Caffeine absorption is complete. Your pupils dilate, your blood pressure rises, as a response your livers dumps more sugar into your bloodstream. The adenosine receptors in your brain are now blocked preventing drowsiness.

4. 45 minutes: Your body ups your dopamine production stimulating the pleasure centers of your brain. This is physically the same way heroin works, by the way.

5. 60 minutes: The phosphoric acid binds calcium, magnesium and zinc in your lower intestine, providing a further boost in metabolism. This is compounded by high doses of sugar and artificial sweeteners also increasing the urinary excretion of calcium.

6. >60 Minutes: The caffeine’s diuretic properties come into play. (It makes you have to pee.) It is now assured that you’ll evacuate the bonded calcium, magnesium and zinc that was headed to your bones as well as sodium, electrolyte and water.

7. >60 minutes: As the rave inside of you dies down you’ll start to have a sugar crash. You may become irritable and/or sluggish. You’ve also now, literally, pissed away all the water that was in the Coke. But not before infusing it with valuable nutrients your body could have used for things like even having the ability to hydrate your system or build strong bones and teeth.”
(Source: Graphic Showing What Happens To Person’s Body After Drinking Can Of Coca-Cola Goes Viral) 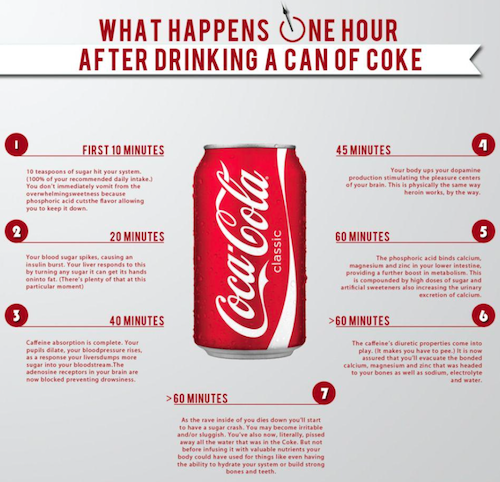 Sugary soft drinks have been implicated, time and again, in a variety of medical ailments and health conditions. For different reasons the unhealthy ingredients and calories which are consumed by way of sweet carbonated beverages seem to contribute to a whole host of chronic degenerative diseases.

Metabolic syndrome, type II diabetes, obesity, cardiovascular disease, rheumatoid arthritis, systemic candidiasis, and cancer are just a few of the medical conditions which can be significantly exacerbated by the daily intake of sweet soft drinks like Coca Cola.

For those who are addicted to Coke, it’s best to find a healthy replacement that will satisfy the sweet tooth as much as possible, while having no downside health risks. There are now a variety of wholesome substitutes which are available. Rostaroma herbal tea and Kombucha tea are two examples.