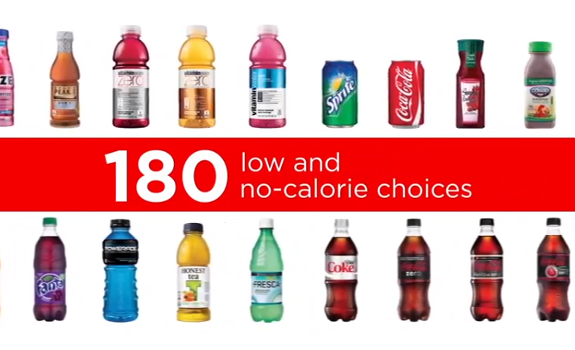 It seems that Coca-Cola actually cares a great deal about your health, at least that’s what one of the company’s latest advertisements has to say. In case you missed it, Coca-Coca came out with an advertising campaign speaking of the nation’s status on health and obesity, and how the company is producing products to help fight the obesity epidemic. In other words, Coca-Cola is positioning itself as a company who cares about your health. It doesn’t.

In the above advertisement, Coca-Cola explains how it can play an important role in fighting obesity, that it offers 180 low and no-calorie beverages among the 650+ total available beverages. The company stresses that the obesity epidemic is not caused simply by the calories derived from Coca-Cola products.

“We are committed to bring people together to help fight obesity. This is about the health and happiness of everyone who buys our products and wants great-tasting beverages, choice and information. The Coca-Cola Company has an important role in this fight. Together, with willing partners, we will succeed.”

Nothing More than Damage Control

Of course it isn’t surprising to see Coca-Cola come out with such a campaign. How else would the company protect itself against the influx of studies concluding that the company’s products are destroying the public’s health? It is no secret anymore that sodas and sugary beverages play critical roles in the development of illness and disease as a whole.

The company’s move is nothing more than damage control. In addition to reacting to public resistance, it seems the company is also seeing a decline in sales – a problem that can be partially mended through a care-driven ad campaign. Coca-cola is under heavy fire, and they know it.

Below is parody of the above advertisement. In this parody, the speaker humorously educates the viewer on the many dangers associated with soda consumption. Here are just a few health issues associated with soda, sugary beverages, and diet beverages loaded with artificial sweeteners like aspartame:

If Coca-Cola were serious about addressing public health and making real changes to fix the obesity issue, the company would: