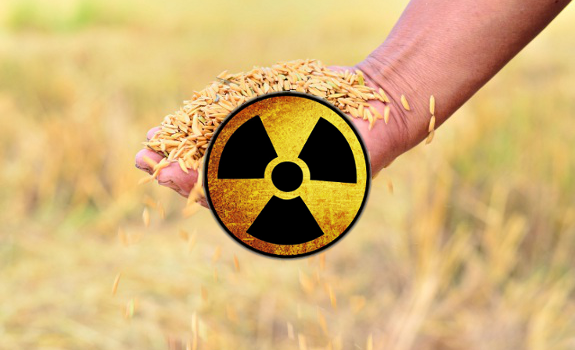 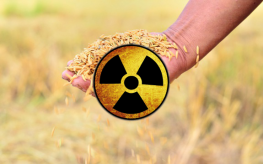 Just recently, farmers in the city of Tamura, Fukushima Prefecture, have begun planting rice in a district previously designated as a ‘no-plant zone’ due to of radioactive fallout. This will be the first time since March, 2011’s core meltdowns that rice intended for public sale will be planted in fields that are possibly still contaminated with radioactive cesium and other toxic materials.

While the Japanese public is vehemently opposed to GMO, do they really want to eat radioactive rice? The government of Japan seems not to care.

Despite the urging of the people of Japan, the government continues to allow farming in radioactive areas while also permitting large quantities of imported GM canola from Canada. There is also now GM canola growing wild around Japanese ports and roads to major food oil companies.

Genetically modified canola such as Monsanto’s RoundUp Ready canola has been found growing around these ports when being tested for GM contamination. Japan was also recently duped into accepting Monsanto’s GM soybeans. Does this country really need any more toxic food?

In other news, animals and people living near the Fukushima radiation are suffering. Wild monkeys that reside in a forest near Fukushima are now showing alarming changes in their blood composition. This doesn’t bode well for humans who were exposed to radiation from within several hundred kilometers of the Daiichi site.

Just weeks ago, two Japanese farmers whose livelihoods are in ruins due to the 2011 nuclear disaster staged a protest at Tokyo’s agriculture ministry, scuffling briefly with police as they unsuccessfully tried to unload a bull from a truck.

Masami Yoshizawa and fellow farmer Naoto Matsumura have remained at their farms to care for their own and others’ abandoned livestock in areas where access has been restricted due to radiation fears since the March, 2011 meltdowns at the Fukushima Dai-Ichi nuclear plant. The livestock they brought with them for the protest had developed unexplainable white spots on their coats. The farmers believe it is due to radioactive fallout.

Thousands of farmers lost their livelihoods when their farms, produce, and livestock were declared off-limits and unsafe, but allowing radioactive farms to plant now doesn’t solve the problem, and neither do genetically modified foods. It seems the corporate biotech bullies won’t stop their own agricultural terrorism, even when a country is down on their luck.