Could this be the reason for the ballooning obesity epidemic? The infographic created by the Center for Disease Control and Prevention shows that hamburgers and french fry meals have tripled in size over the decades, while a cup of fountain soda is a whopping 6 times larger today than it used to be. A 2.4oz portion of french fries has grown to 6.7oz; hamburgers from 3.9oz to 12oz; and soda from 7oz to 42oz.

What may be even worse is that accompanied by this massive increase in portion sizes is the heavy use of harmful and toxic ingredients. While the ingredients used in food used to be minimal, you can find a plethora of toxic substances in the majority of food today, including MSG, aspartame, high-fructose corn syrup, artificial coloring, neotame, caramel coloring, and much more. McDonald’s chicken McNuggets, which would be expected to have nearly 0 ingredients, contains autolyzed yeast extract, dimethylpolysiloxane, sodium phosphate, to name a few ingredients. Even something as simple as ‘strawberry flavor‘ consists of nearly 50 different chemicals. These ingredients along with many more can be found throughout the mainstream food supply. 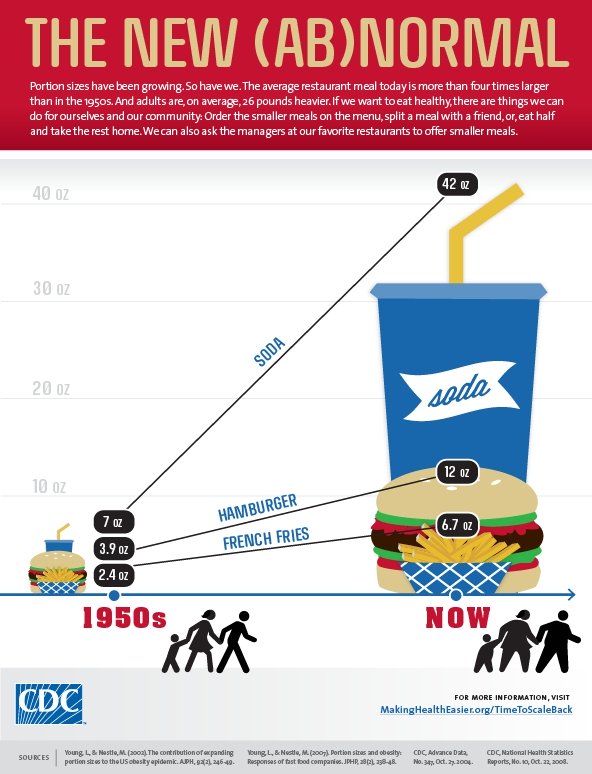 Honing in on the specific increase in portion sizes along with the average increase in weight, there has been a:

Given the continuous downfall of the average American diet over the decades, it is no surprise to see obesity rates (and subsequently every other illness and disease) skyrocket in recent years. Unfortunately, Americans have some of the worst diets in the world, and everyone knows it! With portion sizes increasing, toxic ingredients making their way into the food supply, and Americans continuing to consume this food, it is estimated that 50% of the population will be obese by 2030, lurking around the 60% nation-wide obesity rates in 2010.

Are Americans consuming too many calories? Unfortunately, yes. What’s more, the massive increase isn’t only leading individuals to experience health problems, but work productivity suffers as well. Obese individuals take more sick days and are less productive than health-weight individuals, with the most obese people taking 5-9 more sick days a year. Not only are hospitals, buses, and airplanes making adjustments to accommodate for large individuals, but employers are also paying the price as well. In many cases this loss is in the form of thousands of 10’s of thousands of dollars each year. Actually, the cost of obesity in this regard is thought to be nearly $73.1 billion annually.

The good news is that with a little calorie management, exercise, and organic living, obesity rates can easily begin to spiral downward.

9 responses to “Portion Sizes in Restaurants Quadruple Since 1950s”