An increasing number of doctors believe marijuana should be legalized. A 2014 poll conducted by WebMD and Medscape found that 56% of doctors believe that cannabis should be legalized for medical purposes. Now, a group of more than 50 physicians, including former Surgeon General Joycelyn Elders, have teamed up with faculty members at some of the nation’s top medical schools to call on states and the federal government to decriminalize and regulate the use of marijuana in the interest of public health. 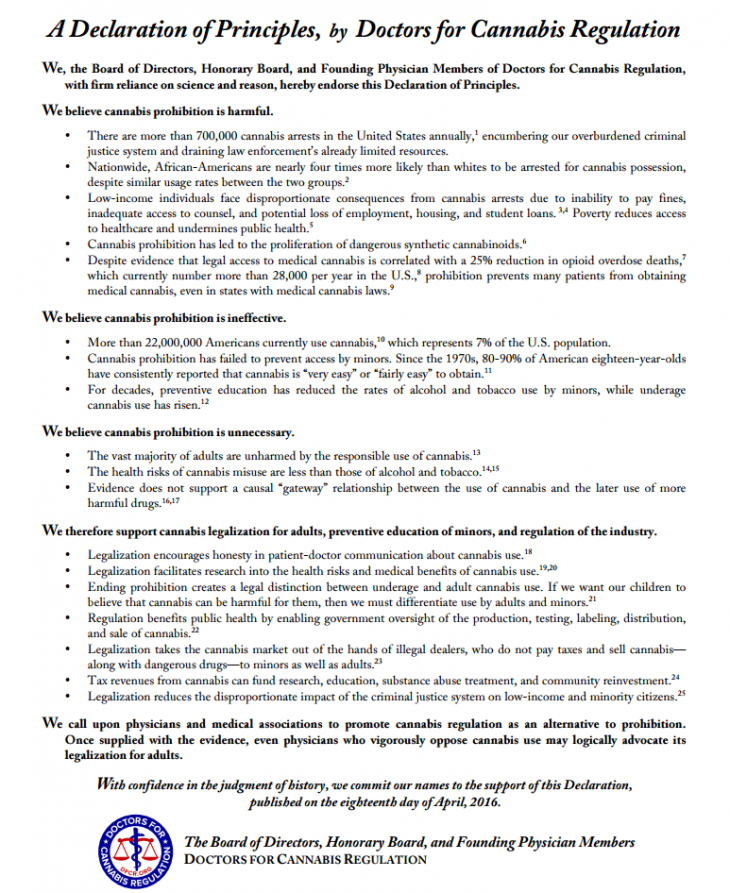 The group, Doctors for Cannabis Regulation (DFCR), is endorsing the legalization of marijuana for recreational use, a break from the position of the American Medical Association (AMA), the largest organization of doctors in the nation.

From DFCR’s point of view, the prohibition and criminalization of marijuana use is more harmful than helpful to the public. The group cites hundreds of thousands of annual marijuana arrests, racial and economic disparities in marijuana enforcement, and the role of prohibition in keeping marijuana prices high and remunerative to violent drug dealers. DFCR says that legalizing and regulating pot helps ensure public safety, and is vital to battling the illicit drug trade and repealing the negative consequences of the authoritarian enforcement policies on disadvantaged communities.

Some polls show that about 58% of the public says it is in favor of decriminalization, and even more individuals support the use of marijuana for medical reasons under the supervision of a doctor. Despite prohibition, some 35 million Americans use pot recreationally.

DFCR founder and board president David L. Nathan said in an interview with The Washington Post that his group isn’t in favor of marijuana use, but rather is against prohibition of the herb. Nathan, an associate professor at Robert Wood Johnson Medical School at Rutgers University, said:

“You don’t have to be pro-marijuana to be opposed to its prohibition.”

The 1 thing DFCR unanimously agrees on is that marijuana is far less dangerous to users and society as a whole than alcohol, tobacco, and “hard” drugs. The doctors acknowledge that about 9% of marijuana users become addicted to the substance, and that heavy use can damage the still-developing brains of adolescents.

The group states that occasional marijuana use by adults is “generally benign,” and that “the burden of cannabis prohibition falls disproportionately upon communities of color and the nation’s poor.”

Nathan says that “doctors should affirmatively support this,” adding:

“If you’re going to make something against the law, the health consequences of that use have to be so bad to make it worth creating criminal consequences. That was never true of marijuana. It was banned in 1937 over the objections of the American Medical Association (AMA).”

Prior to 1937, marijuana was used to treat numerous health conditions. At the time, the AMA feared that criminalizing it would “deprive the public of the benefits of a drug that on further research may prove to be of substantial value.”

But this is 2016, and the AMA now argues that marijuana is a “dangerous drug” and is opposed to decriminalizing it, though the group’s stance has softened just slightly over the years. It recently added language to its position statements calling for “the modification of state and federal laws to emphasize public health based strategies,” rather than punishing users and throwing them in jail for smoking a joint.

At this point, the AMA favors research into the drug, and has called on federal authorities to make it easier to do.

“Physicians are put in the awkward position with respect to individuals who ask for a marijuana recommendation, but otherwise would be perfectly happy purchasing the drug in a retail environment. We believe that the best way to improve the situation is to enact full legalization with smart regulation. That would more clearly separate medical from personal use.”

But Not Everyone Agrees

Some medical professionals are angry with the DFCR, including Robert DuPont, who called the idea of legalizing recreational marijuana “totally idiotic.” DuPont was the first director of the National Institute on Drug Abuse (NIDA), and the second White House drug czar. He opined:

“The idea that we cannot manage the health problems related to marijuana because it’s illegal, that doctors are somehow inhibited from dealing with marijuana use and marijuana problems, is completely wrong.

The idea that legalizing is going to stop the illegal market is equally stupid.” [1]

Read: Where Is Marijuana On D.A.R.E.’s List Of Gateway Drugs?

Doubters and naysayers need look no further than Colorado to see that decriminalization benefits society. Legalization has created jobs for many in the state, crime has dropped since marijuana was decriminalized, and Colorado has earned so much from sales of legal weed that in 1 county alone, $25,000 worth of college scholarships have been established from marijuana taxes.