There is NO Peaceful Coexistence with GMO: USDA Just Doesn’t Get It 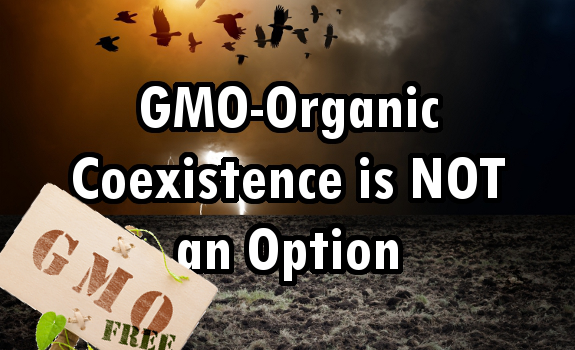 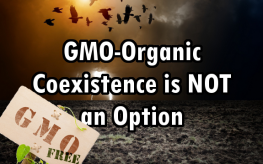 The U.S. Department of Agriculture’s (USDA) latest policy of ‘coexistence’ concerning genetically modified organisms and organically grown crops is one that cannot be allowed. It threatens not just a consumer’s right to choose, but also the delicate balance of an ecosystem that has already been ravaged by genetic tinkering.

In some magical, Walt Disney world, we could all live together peacefully with genetically modified crops feeding those who wanted to eat them and those who wanted to retain their right to eat non-GMO, organic food dining at the same table, but this is just not possible. Coexistence of these crops is a fairy tale, and not one with a happy ending.

The Many Issues of GMO-Organic Coexistence

If genetically modified crops or ‘suicide’ seeds cross-pollinate nearby crops, the right for an organic farmer to continue his organic growing status is unwillingly forfeited. GE pollen and seed can drift miles from a single flight on the wind. How neighbor-farmers can simply ‘work out informal agreements’ as the USDA suggests to keep one person’s farm from being contaminated is beyond reason. No matter what agreements farmers make, nature will take precedent.

Furthermore, simply taking out insurance to pay for damages from contamination does not protect the natural world, the untarnished crops, the lack of super bugs or super weeds, or the desolation of entire colonies of bees and butterflies.

Moreover, genetically grown crops are completely unregulated and organic farmers currently have to pay thousands of dollars and undergo numerous tests to ensure that they are indeed providing organic food to the public. The policy is already leaning towards the support of GMO and biotech companies, not making an even playing field for all – there certainly is no fair ‘coexistence.’ Biotech gets a free pass to poison the planet, and organic gardeners are supposed to just accept it with their dwindling acreage – seeing that more than half the US is already overgrown with GMO crops.

This very issue was recently exemplified in a court case between two neighbor farmers in Australia. One sued the other after he found GE canola growing in his organic field. The farmer’s farm that was contaminated couldn’t sue Monsanto, because the company has ruthlessly created legislature in multiple countries which props up their innocence no matter what results from GM planting.

Contamination of fields by GM seed and pollen doesn’t just place organic farms and farmers at risk, causing incalculable monetary damage, but also the entire food supply, and possibly the entire ecosystem – poisoning our ground water, soil, livestock, and more. It also mitigates food producer’s support of those who want to grow non-GMO food since their confidence in those crops would dwindle due to worries about cross-pollination.

The USDA Secretary Vilsack recently charged his newly appointed Advisory Committee with addressing the problem of GE contamination, but he asks them to do so after it has already occurred, instead of stopping it before it has had a chance to ensue. It isn’t just about compensating organic farmers at this point – if half of US crops are already GM and even another 5% a year, a modest figure, are cross-pollinated through wind storms and pollinating insects, then soon the entire farmable land in the US will be GMO – and that is just what Monsanto, Dow, Syngenta, etc. would like to see.

There is no ‘coexistence’ with GMO – there is only a biotech take over and it must be stopped. Valiantly, organic advocates are demanding the USDA identify and mandate the adoption of proven GE contamination measures by GE farmers and patent holders. Sadly, this is like trying to stop a bullet wound with a Q-tip.

Please tell the USDA to institute a complete moratorium on GM crops nationwide. We have until March 4th to make our voices loud and clear. There is currently an opened docket posted by the USDA to receive public feedback on the policy. Without your action, the biotech lunacy will continue. Help halt this genocide of our land, plants, soil, water supply, and people.

3 responses to “There is NO Peaceful Coexistence with GMO: USDA Just Doesn’t Get It”