And the Top Offenders Are...

While driving through the streets of many cities in America, an eyesore is revealed that flies in the face of logic, mainstream medical literature, and law. Make no mistake that each cell tower you see represents an utter lack of concern for generations of children, families, and communities as a whole. What many in the medical community warned of for years is now coming to the surface in scientific studies as cell phone tower radiation rains on the public.

A key study released last month chronicles why children absorb more microwave radiation than adults, and lists the dangerous consequences. In addition, children’s brains have a higher sensitivity to the accumulation of adverse effects of chronic exposure to EMF, as their brains and bodies are in early stages of development.

Correlations have been made between radiofrequency electromagnetic fields (RF/EMF) exposure in children and disruption in memory, decline of attention, diminishing leaning and cognitive abilities, increased irritability, increased epileptic readiness and higher disease rates.

The International Agency for Research on Cancer (IARC), part of the United Nations’ World Health Organization (WHO), rates RF/EMF as possible class 2B carcinogens. In a list of 2B carcinogens that contain lead, pesticides, DDT, gasoline fumes, and chloroform, cell towers are the only class 2B carcinogens to continuously bathe communities across the US and the world.

Here’s how it works: Typically, each cell tower pays the landowner(s) either a lump sum or a monthly payment to build and operate a cell tower on their property. Perhaps a bigger question is, on school property bought with public dollars, why are we allowing private corporations to build hazardous carcinogenic emitters on top of our children’s heads?

This would be comparable to allowing open air, waste dumping of DDT, pesticides, lead, gasoline, etc. on schoolyard playgrounds. Do parents and communities know to who or where these monthly payments (or one-time lump sum) for the cell towers are going?

Read: 10 Ways to Reduce Radiation from Cell Phone Use

Some people reading this may not understand the danger presented by not removing these towers and their EMF pollution from their children’s schools, but the petition contained in this article represents a start down the path to reclaim our children’s health and grow awareness around radiofrequency electromagnetic pollution in communities and at home. 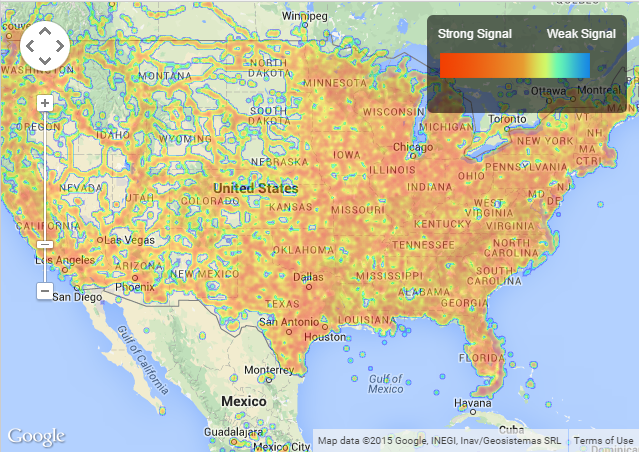 Sprint, You Are the Weakest Link

A quick survey of the major cell carriers in the United States shows that among the major corporations, Sprint is one of the moderate to higher emitters of RF/EMF by looking up their total coverage using OpenSignal.com. In addition, Sprint sticks out as one of the more vulnerable corporations having a fraction of the employees compared to other cell carriers, reporting the lowest profit margin of any cell carrier (-0.05%), and having the lowest stock price of the major players.

It all starts with a public petition, and depending on how Sprint wants to handle things, can easily move forward into a viral boycott. The purpose is to use Sprint, the financially weakest link in the multi-trillion dollar cell phone industry, to send a message to them all.

As demonstrated with companies like Monsanto, an educated public can not only affect an individual company’s market share/market cap, but more importantly can shift an entire industry according to The People’s will. In the food sector, using GMO ingredients is now an immediate financial labiality for companies. It is clear that smart phones, tablets, computers, and their run-away technology are here to stay and have given us communication and information capabilities like never before.

However, through their actions, Verizon, Sprint, AT&T, T-Mobile, and many others have crossed an inexcusable line by purposely putting profits over the health and lives of our children and communities.

The Sound of Silence

A petition could be viewed as a community and people’s collective voice asking nicely – please stop. In the event that Sprint (and other cell carriers) ignore or merely give public lip service to the people’s request, there are additional steps to take. Sprint reports a total of 38,000 employees as of 2014 while Twitter currently reports a total of 284 million active accounts users in over 35 languages and Facebook boasts an impressive 2.2 billion users. How long would it take to affect the total revenue and market cap for Sprint if a viral campaign kicked off spotlighting Sprint’s refusal to publically remove their RF/EMF emitting devices from cell towers on school property?

Their call center can’t be that big.

“We the undersigned of this document strongly urge Sprint and its management to lead the wireless and cellular phone corporate sector in a public pledge to remove all cell towers from school property, playgrounds, and all other locations that children and kids commonly gather in communities. Perhaps graveyards will be more appropriate locations to place your towers. We The People are not as concerned about the health of the individuals who reside in those locations”