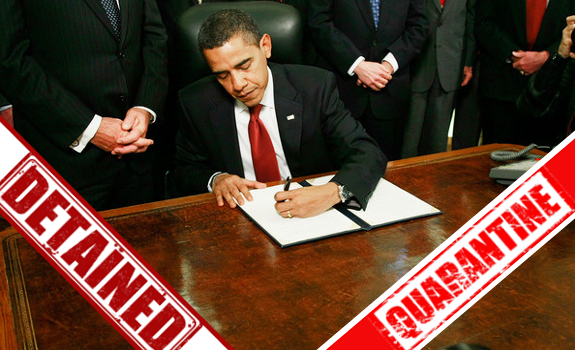 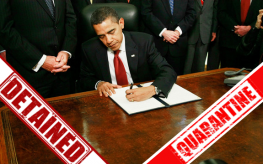 Is America headed for widespread, involuntary incarceration due to Ebola biowarfare?

July of this year, President Obama signed into law an amendment to the Executive Order 13295, which redefines who can be quarantined and why. This does not bode well for a nation that could potentially face an Ebola pandemic. It smacks of pre-meditated bio-warfare and martial law on a nation’s own citizens.

This means that any police officer or ‘health official’ can, without question, and on suspicion alone, quarantine someone simply for showing any sign of ‘respiratory illness.’ None other than the war-mongering Bush Administration, first put the order into place, originally meant to quarantine victims of SARS. Ebola just happened to be listed on the original executive order, too, signed by Bush. But now, with the exception of influenza, Americans can be detained for any health concern, including Ebola, even if it is not named as such.

When you add to this the fact that the Centers for Disease Control and Prevention (CDC) already has measures in place for dealing with an outbreak of a communicable disease which allows for the quarantine of “well persons” who “do not show symptoms” of the disease, then Americans need to pay some serious attention to what is happening to their civil rights.

Furthermore, under the Model State Emergency Health Powers Act, public health authorities and governors would be given expanded police powers to seize control of communications devices, public and private property, as well as a host of other Orwellian measures in the event of a public health emergency.

There is only one infected person in Dallas for now, but 80 more are under surveillance by the CDC. What do you suppose our criminal government has planned for the other thousands of cities in the U.S.? The issue does not revolve around taking measures to prevent an outbreak in the nation; if done with the true, sincere intention of protection, then without infringing on civil rights, that would be OK. The issue is when power is exercised at a dictator level.

Emory University Hospital in Atlanta was set to receive a single patient infected with Ebola, but now there are said to be three.

Government officials have been saying that Ebola only spreads through bodily fluids, but it is also known to spread through tiny air particles.

I strongly encourage you to read The Survival Medicine Handbook, written By Dr. Alton and his wife, Nurse Amy Alton. The information will be invaluable in a situation where modern medicines are no longer available, and the government tries to quarantine an entire nation for whatever its plan may be. What’s more, be sure to educate yourself on ways to boost immunity and protect yourself from Ebola and other viruses.