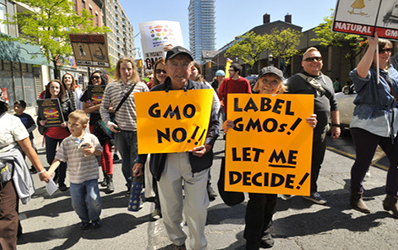 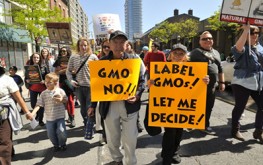 Public hearings are about to be held in two major cities of the US, just within earshot of mainstream media and the politicians on Biotech’s payroll. Albany, New York and Annapolis, Maryland are hosting these important debates in order to sway Congress into making a choice about labeling GMOs.

While the heavily and illegally funded Grocery Manufacturer’s Association carried out the chess move of relocating the GMO battle to Washington, D.C., enlisting more than 28 food and Big Ag organizations to help do its bidding in Congress, it did so because the last major state-battles were won at a heavy cost. If a federal mandate were passed, they cold stop funneling illegal millions into state-by-state campaigns.

A GMA-led coalition may have won battles in California and Washington, but many GMO labeling advocates are disdainful of their tactics.

Andrew Kimbrell, executive director of the Center for Food Safety, said the new coalition was organized to “steal away consumer choice in Congress.”

Of course, there are vocal detractors in the GMA – Leah Wilkinson, a director of ingredients, pet food, and state affairs for the American Feed Industry Association says that, “GMO labeling should be a federal solution.” Note the word ‘solution,’ – the carefully chosen method of propaganda evident in this very statement. A solution for who? The billion-dollar biotech and food manufacturing industries? It certainly wouldn’t be a solution for the many millions who want to know what is in their food before they buy it.

They aren’t that bright, though, if you look at the next statement coming from Wilkinson’s double-tipped tongue:

“If a labeling solution is not agreed upon and even a few of the pending state initiatives are successful, the feed industry’s costs of doing business goes up, on-farm production costs go up, and ultimately the consumer pays the price, with no important information in hand.”

Correction: the cost of doing business the corrupt way goes up. Companies like Costco and others that are selling non-GMO, organic products are actually doing quite well. Their stock is up. Within this simple admission is the evident fear of biotech. They are trying to project on us their own nervous projections of losing important Agri-business. In the meantime, GMO-labeling advocates aren’t just demanding to know what’s in their food, they are starting to come up with their own methods – like growing their own.

The pro-labeling side got there first with federal legislation sponsored by U.S. Sen. Barbara Boxer (D-CA) and U.S. Rep Peter DeFazio (D-OR) to mandate national labeling of GMO foods.

At this point, the GMA-led group does not have specific legislation, but there is a list of elements that members want to see in their “solution.” These include:

“Last year, a GMO bill died late in the session in Albany. GMO bills are back in both the Empire State Senate and the Assembly. Bipartisan sponsorship by Democrat Linda Rosenthal in the Assembly and Republican Ken LaValle in the Senate on a bill that requires all GMO food sold in the state to be labeled will get hearings in both chambers, probably in late March.

Furthermore, Maryland’s House Bill 1191, which is cross-filed as Senate Bill 0776, has been scheduled for a hearing before the Health and Government Operations Committee on March 11 at 1 p.m. The House/Senate measures require specified raw foods and packaged foods that are entirely or partially produced with GMO ingredients to be labeled.”

If you live in one of these states, or can get to them, please actively participate in the public hearings. Your voice counts. It can help protect state’s rights to choose before it is swallowed up into the federal-Monsanto-Dupont-Dow-biotech black hole forever.