New Painkiller as ‘Effective as Morphine,’ but Without the Side Effects

But so far, it has only been tested on mice

Scientists have created a new opioid compound that’s as effective at killing pain as morphine, but without the side effects. It could mean thousands fewer people becoming addicted to prescription pain medication in the future. But untold effects are questionable, as it is modified by man.

The finding represents a turning point in the way scientists have traditionally tried to handle opiate addiction and overdoses.

For decades, they’ve attempted to tackle 1 addictive painkiller after another by coming up with an even stronger drug to treat the addiction to its parent. Morphine was designed to curb opium cravings, and both codeine and heroin were lauded as nonaddictive painkillers. [1]

Even though this hasn’t worked, some scientists in Japan announced earlier this year that they’d created yet another addictive opioid, this time of the GMO variety.

Might this new compound, dubbed “PZM21,” be the game-changer?

Dr. Aashish Manglik of the Stanford University School of Medicine and Henry Lin of the University of California San Francisco (UCSF) “discovered” PZM21 by searching for a compound that would precisely fit a specific type of opioid receptor in the brain and spinal cord. [2]

Using powerful computers, Manglik and Lin tested more than 3 million compounds, each in an average of 1.3 million configurations.

“We tried to look for molecules that would still bind to this 3-D structure, but are as far away from morphine and codeine as possible.” [1]

The duo then manually checked the top 2,500 compounds, selecting just 23 for further testing. Seven of them seemed especially promising.  [2]

The researchers then tested 500 analogs of the 3 of them and narrowed down the field to 15, then 7, then finally 1.

Manglik and Lin tweaked that 1, final compound, rearranging the atoms in the molecule to get the best possible fit. 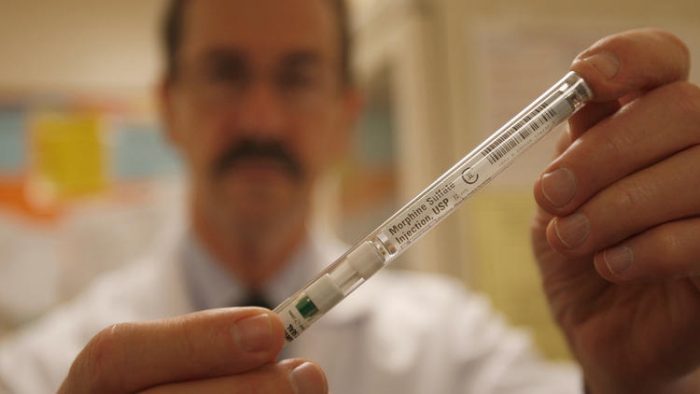 When the team gave PZM21 to mice in the lab, they found that the molecule was able to target the designated opioid receptor, relieving pain on the level of morphine. [3]

Specifically, the more PZM21 the mice were given, the more pain relief they experienced. The compound mitigated 87% of the rodents’ pain, compared with 92% for morphine. [2]

Excitingly, this was accomplished without triggering the constipation that the morphine is known for. [3]

PZM21 did cause breathing problems similar to morphine, but the animals’ breathing improved before the painkilling properties wore off. With morphine, respiratory depression continues even after the pain returns. [2]

The scientists also discovered that PZM21 mainly targeted opioid circuits in the brain to relieve pain, with negligible impact on the opioid receptors in the spinal column – an ability no other opioid can claim. [3]

But the truly thrilling finding was that PZM21 did not stimulate the dopamine pathways in the brain, which are the reward systems known to fuel addiction. In other words, the mice were largely pain-free, but they didn’t get high.

“If you give a mouse a drug that activates its reward pathways like cocaine, amphetamine or morphine, the mice just run around more. In this compound, we saw very little of that.” [1]

PZM21 Shows Promise, but it Might not be the Silver Bullet

The number of overdose deaths associated with opioids has quadrupled since 1999. By 2014, the number of annual overdose deaths in America reached 14,000. Opioids cause about 1,000 emergency room visits in the United States every day. The reality is that powerful painkillers are a necessary evil. [2]

So far, PZM21 has only been tested in mice. There’s no way to know for sure whether it will affect humans the same way.

Co-senior author Brian Shoichet, Ph.D., a professor of pharmaceutical chemistry in the School of Pharmacy at UCSF, said:

“We haven’t shown this is truly non-addictive. At this point we’ve just shown that mice don’t appear motivated to seek out the drug.”

Even so, it appears that science may have come 1 step closer to reducing the risk of going into the hospital for an appendectomy and walking out addicted to drugs. [3]

The authors detail their findings in the journal Nature.

One response to “New Painkiller as ‘Effective as Morphine,’ but Without the Side Effects”