This is Why We Need to Stop Using Plastic (Infographic)

Here are the alternatives to plastic

How often do you use plastic? It may be a convenient way to drink water throughout the day, but our dependency no plastic water bottles is having detrimental impacts on the environment. In fact, about 32 million tons of plastic waste was generated in 2012. Not only does this pollute our oceans, but it negatively impacts the entire ecosystem as the plastic particles are consumed by animals. The telling infographic below may sway you to use less plastic in 2015.

It was recently revealed that more than 5 trillion pieces of plastic are floating around in the oceans. Much of this pollution is actually in the form of small, ‘confetti-sized’ particles. These small pollution particles are being consumed by fish and eventually travel up the food chain – causing potentially serious consequences for the health of wildlife and humans alike.

“We did find that the chemicals do transfer from the plastic to the fish,” said lead author Chelea Rochman, “and we saw a greater concentration in the fish that ate the plastic that had been in the ocean than the fish that had eaten the controlled diet or the clean plastic diet.”

What’s more, both plastic-eating groups had tumor development. Those fed clean plastic had cell alteration while those who ate dirty plastic experienced cell death. One fish on the dirty plastic diet was found to have 25% of its liver taken over by a tumor when it was dissected.

Related: Bottled Water isn’t All that Great Anyway – Here’s Why

Even more concerning, about one million sea birds and 100,000 marine mammals are killed annually from plastic in our oceans. 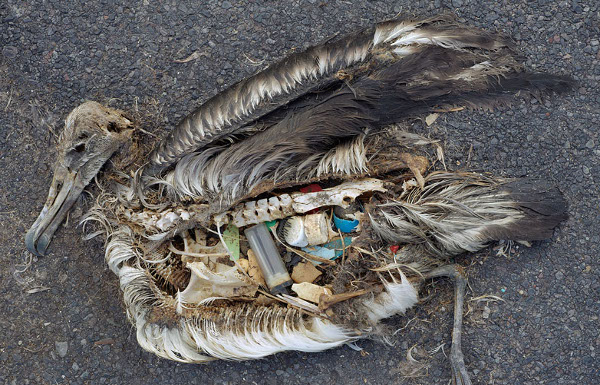 Thanks to the below infographic by CustomMade, you can easily digest ways to cut back on plastic use. Instead of using plastic, try alternative materials such as reclaimed wood, steel, and glass. These can help gradually reduce our reliance on plastic and pose less of an impact on the Earth. Reducing plastic use can range from short term decisions—swapping plastic sandwich bags for washable canvas or throwaway plastic utensils for metal ones—to more long term changes, such as trading in your plastic picnic tables for reclaimed wood barn tables. Making smart swaps can make a big difference over time.

See below for other tips on how to move away from our plastic dependency.