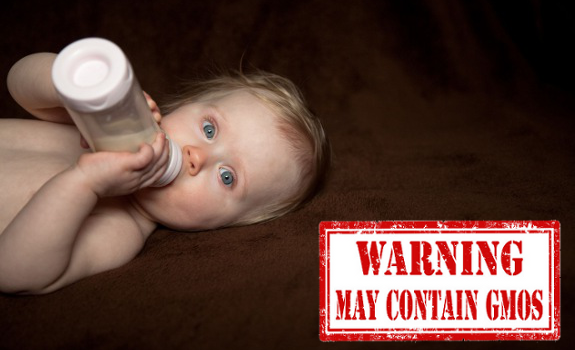 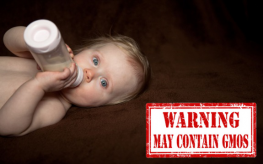 This just in: the Center for Food Safety (CFS) has announced that genetic testing has confirmed the presence of soy that was genetically engineered by Monsanto for heavy pesticide exposure in infant formula now being sold in Portland, Oregon. This should come as a wake-up call to parents getting ready to vote for GMO food labeling in the state.

Just in case you weren’t aware, genetically altered soy has been proven to have higher levels of herbicides than almost any other GMO crop. In many cases, the levels of glyphosate have been called extreme. Is that really what you want to feed your developing infant?

A newborn’s immune system is not nearly as strong as an adults, and even adults are showing compromised immunity with the consumption of so many herbicide- and pesticide-riddled foods stemming from GMO crops.

The testing of Portland-sold baby formula was coordinated between CFS and Dr. Ray Seidler, the original EPA scientist to study genetically engineered crops (now retired) and past professor at Oregon State University.

Another recent nationwide study by Consumer Reports found that genetically engineered ingredients are in more than 80 common food products.

“I think most moms purchasing infant formula have no idea they are feeding their baby a product that has been genetically engineered to survive exposure to high levels of chemical pesticides. It’s no surprise that Monsanto is the top donor opposing Measure 92 which would give Oregonians the ability to know what foods have been genetically engineered. The presence of these products in infant formula being sold in Oregon really highlights the need for basic labeling.”

“Everything we know from the recent medical literature suggests we should be doing everything possible to reduce infant exposure to chemicals.  Finding soy in infant formula that has been genetically engineered specifically to survive high levels of chemical pesticide spraying is a real concern and takes us in the wrong direction.”

The testing was carried out utilizing three brands of infant formula sold at Fred Meyer in Portland. Which were they?

There are likely more infant formulas that contain GMO ingredients, even if they haven’t been tested – and biotech can get away with poisoning your children because they aren’t currently required to label anything as GMO.

This November 4th, please remember to tell every mom you know – vote for mandatory GMO labeling on Measure 92. If you don’t live in Oregon, spread the word. We can’t keep letting Monsanto, Bayer, Dow, and Syngenta, among others, keep creating toxic ‘food’ that we feed our families.