The History of a CHEMICAL company

Monsanto is now instantly recognized as the company dominating the global food supply with its more than 7000  current worldwide patents. But today’s Monsanto is not a corporate newcomer. Although its literature heralds the company as having a clear and principled code of conduct and a pledge to demonstrate integrity, respect, ethical behavior, and honesty in everything they do, the truth is that this company has a legacy of contamination and cover-up that dates back more than a century.

The Rise of  one of ‘The Worst Corporations in the World’

At the turn of the 19th century, John Queeny founded Monsanto Chemical Works to produce such nefarious products as saccharin, synthetic vanillin, and laxative and sedative drugs. The company was well positioned as a leading force in the dawning American chemical industry.

From the 1920’s until the late 1960’s, Queeny’s son, Edgar Monsanto Queeny, expanded the company into a global franchise, and changed its name to Monsanto Chemical Company in 1933. He added sulfuric acid, PCBs, DDT, synthetic fibers, and an array of plastics that included polystyrene to the product line.

During this time, Monsanto also created Agent Orange, one of the herbicides and defoliants used by the U.S. military as part of its herbicidal warfare program, Operation Ranch Hand, during the Vietnam War from 1961 to 1971.

Agent Orange was a combination of equal parts of two herbicides, 2,4,5-T and 2,4-D. The 2,4,5-T used to produce Agent Orange threw off dioxin as a byproduct, a compound the World Health Organization classes as highly toxic. Dioxin can cause reproductive and developmental problems, damage to the immune system, hormone disruption, and the initiation of cancer. Dioxin persists in the environment and accumulates in the body, even at minimal exposure.

In areas where Agent Orange was used, the concentration of dioxin was hundreds of times greater than the levels considered safe by the Environmental Protective Agency (EPA). This resulted in a host of terrible health consequences for anyone exposed. and led to decades of litigation during which Monsanto fought tooth and nail to avoid paying for the horrific damage military personnel suffered from. The class action case that followed was settled out of court in 1984 for $180 million, reportedly the latest settlement of its kind at the time.

More than 60 years of Contamination and Cover Up 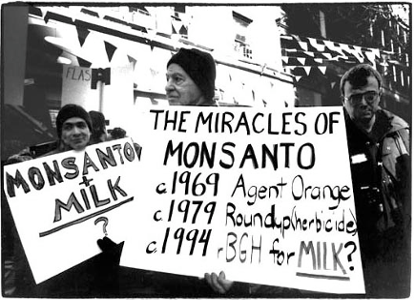 From 1929 until 1995, Monsanto operated a chemical plant in the small town of Nitro, West Virginia, where it manufactured Agent Orange. In 1949, a pressure valve blew on a tank of the herbicide, sending plumes of smoke and vapors containing dioxin throughout the town, coating residents and the homes they lived in with powdery residue.

In a short time, some people developed skin eruptions and were diagnosed with an enduring and disfiguring condition known as chloracne. Others had prolonged pain extending from their chest to their feet. According to a medical report following the explosion, “It caused a systemic intoxication in the workers involving most major organ systems.”

Monsanto’s reaction? The company down-played it, claiming the chemical was slow-acting and just a minor irritant.

To get rid of the dioxin, the company dumped it into storm drains, streams and sewers, and stored it in landfills. Dioxin persisted in waterways and in the fish that lived in them. When residents sued for damages, they were told by Monsanto that their allegations had no merit and that the company would defend itself vigorously.

The residents of Nitro or their descendants finally received $93 million from Monsanto in 2012.

PCBs (polychlorinated biphenyls) are used in many industries as hydraulic fluids, sealants, and lubricants. These chemicals have been demonstrated to cause cancer, as well as a variety of other adverse health effects on the immune, reproductive, nervous, and endocrine systems.

Monsanto’s plant in Anniston, Alabama produced PCBs from 1929 to 1971. Since then, tons of contaminated soil have been hauled away from the plant, but the site continues to be one of the most highly polluted areas in the country.

Why was it such a mess? During its production years, waste PCBs were dumped  into a nearby open landfill, poured into a creek that ran alongside the plant,  or just allowed to run off the property during storms. During those years, the townspeople drank from their wells, ate fish they caught, and swam in the creeks, oblivious of the PCBs. When public awareness began to mount, authorities found high levels of PCBs all over the place, and in the bodies of those people, where it will remain forever.

In 1966, a Monsanto biologist testing waterways near the Anniston plant found that when live fish were added to the water, “All 25 fish lost equilibrium and turned on their sides in 10 seconds and all were dead in 3 1/2 minutes.”

In 1970, the FDA found high levels of PCBs in fish near the Anniston plant, and Monsanto jumped into cover-up mode. A leaked internal memo from a company official outlined steps for the company to take to limit disclosure. The strategy called for engaging public officials to fight the battle for them. “Joe Crockett, Secretary of the Alabama Water Improvement Commission will try to handle the problem quietly without release of the information to the public at this time,” the memo promised.

A statement eventually released from Monsanto’s world headquarters in St. Louis stated, “Quoting both plant management and the Alabama Water Improvement Commission, the PCB problem was relatively new, was being solved by Monsanto and, at this point, was no cause for public alarm.”

The class action suit for Anniston was finally settled  in 2003, when Monsanto was forced to pay $700 million.

More PCBs Dumped into the Environment

In 1977, Monsanto closed its PCB plant in Whales, but not before dumping thousands of tons of waste into the quarry of the town of Groesfaen. Authorities there say the site is still one of the most contaminated in Britain.

Internal papers indicate that Monsanto knew about the PCB dangers as early as 1953, when toxicity tests on the effects of PCBs killed more than 50% of the lab rats subjected to them. In 2011, Monsanto reluctantly agreed to help in the clean up after an environmental agency found 67 chemicals at the quarry site that were exclusively manufactured by Monsanto. Yet that effort remained underfunded and the quarry remains contaminated.

The Guardian reported that Monsanto wrote an abatement plan in 1969 which admitted “the problem involves the entire United States, Canada, and sections of Europe, especially the UK and Sweden.”

Navy Rejects Monsanto Product Because it was ‘Too Toxic’

Monsanto tried to sell its hydraulic fluid, known as Pydraul 150, to the navy in 1956, and supplied test results in their sales pitch. But the navy decided to do its own testing, and the company was informed that there would be no sale because the product proved to be too toxic. In an internal memo divulged during a court proceeding, Monsanto’s medical director stated that “no matter how we discussed the situation, it was impossible to change their thinking that Pydraul 150 is just too toxic for use in submarines.”

Monsanto’s move into biotech began in the 1970’s, and in 1983 the first genetic modification of a plant cell had been achieved. Synthetic bovine growth hormone (rBST) was on the horizon. Monsanto’s public relations department portrayed GM seeds as a panacea for alleviating poverty and feeding the hungry. In 1985, the company bought NutraSweet artificial sweetener, a branded version of aspartame – the compound responsible for 75% of the complaints reported to the FDA’s adverse reaction monitoring system.

In the late 1990’s, Monsanto created a new company known as Solutia, and off-loaded its chemical and fiber businesses. L. Bartlett and James B. Steele, chronicling the rise of Monsanto for Vanity Fair magazine, noted the reason for the spinoff was to channel the bulk of Monsanto’s mounting chemical lawsuits and liabilities into the spun-off company, thereby creating a clean image for Monsanto. Solutia became Monsanto’s solution!

As the company, now known simply as Monsanto, moves through the 21st century, it has a ‘new cleaned-up image,’ and a fine sounding mission statement. It refers to itself as a relatively new company that promotes sustainable agriculture and delivering products that support farmers around the world.

Except Monsanto is the 3rd most hated company in the world.

Monsanto’s legacy of contamination and cover-up should be a wake up call for you to run from the GMOs they have spawned. Remember the old adage that says leopards can’t change their spots?