Monsanto’s disregard for human health is evidenced by their hazardous GMO crops and herbicides, but a shocking new report has revealed the company’s illegal ‘slave-like’ working conditions. Forcing slave workers to work the cornfields for 14 hours per day and buy their food (most likely GMO) at highly-inflated prices from the company store, Monsanto has been running these slave rings for an unknown number of years.

What’s more is the company not only ‘hired’ all of the workers illegally, but prevented them from leaving the farm premises and withheld their salaries. The information came to light following a raid by Argentina’s tax agency known as AFIP, where it was revealed that the farmhands were being forced to work almost twice as long as legally permissible and given no compensation. Amazingly, AFIP says that it will hold Monsanto responsible for the slave-like conditions.

Unsurprisingly, Monsanto failed to respond to the story.

This is not the first time Monsanto has abused workers, or even farmers dedicated to using the company’s GM seeds. In fact, Monsanto’s previous crimes against the human race are arguably even more despicable. In 2008 it was revealed that thousands of farmers were committing suicide after using GMO crops. Due to failing harvests and inflated prices that bankrupt the poor farmers, they began to kill themselves oftentimes drinking the very same insecticide that Monsanto supplied them with.

Monsanto conned the farmers into buying GM seeds, which were heavily overpriced and performed far worse than traditional seeds. Monsanto charged the struggling farmers £10 for 100 grams of GM seed, while they could have purchased 1,000 times more traditional seeds for the same amount. The result was career-ending harvests that led to mass suicide.

‘We are ruined now,’ said the dead man’s 38-year-old wife. ‘We bought 100 grams of BT Cotton. Our crop failed twice. My husband had become depressed. He went out to his field, lay down in the cotton and swallowed insecticide.’

Village after village, families were crushed by Monsanto’s tainted seeds. Perhaps even more concerning is the fact that these GMO crops are now consumed across the globe despite a review of 19 studies announcing that consumption of GMO corn or soybeans may lead to significant organ disruptions in rats and mice – particularly in the liver and kidneys. Of course GMO crops not only destroy human health, but devastate the environment.

Thanks to Monsanto’s best-selling herbicide Roundup, farms across the world are experiencing the emergence of herbicide-resistant superweeds. The heavily resistant weeds have an immunity to glyphosate, an herbicide that Roundup contains. These resistant weeds currently cover over 4.5 million hectares in the United States alone, though experts estimate the world-wide land coverage to have reached at least 120 million hectares by 2010. The appearance of these superweeds is being increasingly documented in Australia, Argentina, Brazil, Chile, Europe and South Africa.

Following current trends, genetically modified food products will makeup the majority of the future food supply if a change is not made. Statistics show how GMO crops and ingredients have skyrocketed in even the past few years. 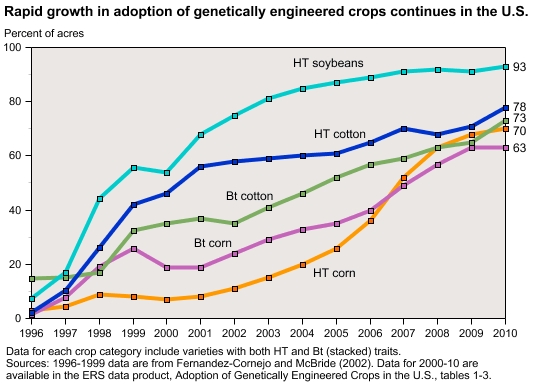 France, Hungary, and Peru are a few of the countries that have decided to take a stand against Monsanto. Hungary actually went as far as to destroy 1000 acres of maize found to have been grown with genetically modified seeds, according to Hungary deputy state secretary of the Ministry of Rural Development Lajos Bognar.  Peru has also taken a stand for health freedom, passing a monumental 10 year ban on genetically modified foods. Amazingly, Peru’s Plenary Session of the Congress made the decision despite previous governmental pushes for GM legalization. The known and unknown dangers of GMO crops seem to supersede even executive-level governmental directives.

Through spreading information and speaking out about Monsanto’s crimes against humanity, real change can occur. Even small amounts of activism can result in major geopolitical change.