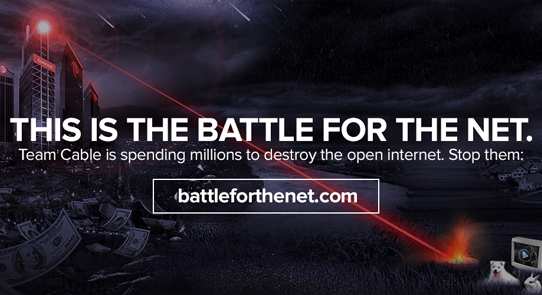 (NaturalSociety) A mere 6 corporations already control 90% of all media – that includes television, magazines, newspapers, Hollywood movies, and even, to some degree, the Internet. Now things may get worse with our most free information resource.

Most of us seek alternative media sources because we realize that there is an ‘illusion’ of choice and freedom of information on networks like CNN, Fox, the Wall Street Journal, Time Magazine, 60 minutes, and even NFL.com. GE and Time Warner Cable control a huge portion of what you see, and they are aligned with specific interests – all of which are not particularly interested in making sure you know about non-pharmaceutical cancer remedies, the latest tactics of the GMA to prohibit GMO labeling, or how fluoride is poisoning municipal water supplies.

Many people are savvy to this problem concerning freedom of speech and information. But now it’s going to a new level.

Have you heard of “internet slow lanes” and “internet fast lanes?”

“The reference to slow lanes has to do with the principle of net neutrality—the notion that all Web traffic should be treated the same and that Internet providers such as Comcast and Verizon shouldn’t be allowed to charge certain companies for the right to provide some content at faster rates [which is exactly what may happen]. Proponents of net neutrality argue that it is a matter of fairness: if media conglomerates like Disney can buy access to “fast lanes” while cash-strapped startups can’t, Internet users will eventually start gravitating away from smaller Web sites and toward big, powerful ones. Opponents contend that this is an overreaction; the Internet isn’t a utility like water or electricity, they point out, and shouldn’t be regulated like one.”

After receiving over 1.4 million public comments and several popular websites including Netflix, Reddit, and Tumblr requesting a “day of action” this week, the Federal Communications Commission (FCC) will reach the deadline for comments on Chairman Tom Wheeler’s Open Internet proposal on Sept. 15 concerning this gigantic issue.

For those who want to understand more about what is at stake, please watch a key video below on the topic:

In short, the FCC (government) proposal to “allow” fast lanes is a red herring designed to scare the public into giving the Feds authority over the Internet. We all know we can’t trust our current government with such power.

We already know that large biotech corporations, pharmaceutical companies, chemical herbicide makers, as well as corporations which pollute our water, air, and soil have big sway over mainstream journalism. But following the Internet Slowdown this past September 10, many more people are now aware of just how important Internet neutrality and unbiased reporting truly is.

Read this article for more information, and click the button below to be provided with resources to help in any way possible.

You can take action today, by signing the petition to Tom Wheeler, the chairman of the FCC, and let him know that American people demand unbiased Internet access and that there is no way we will tolerate the Federal takeover of the last bastion of unbiased information. You can also write your personal Congressman or woman and let them know what you think of this attempted takeover of information.