Acupuncture for Pain Competes with Morphine in Shock New Study

Acupuncture has been recognized by the World Health Organization since 1996 as a safe and effective treatment for a range of complaints, including pain and discomfort. Unfortunately, its use in a hospital setting, where patients usually must take whatever treatment they can get, is still very rare. But an amazing new study in the American Journal of Emergency Medicine will hopefully change more attitudes towards the practice.

Titled Acupuncture vs intravenous morphine in the management of acute pain in the ED (emergency department), the study involved 300 individuals, with 150 in the acupuncture group and 150 in the morphine group used as a control. The only significant difference between the two groups was that there were more abdominal pain cases in the morphine group, and more lower back pain cases in the acupuncture group. Otherwise, age, sex and other health problems were similar.

What was Significant? The Results!

From the 5-minute point, the acupuncture group reported a clinically significant, greater drop in pain scores, which lasted for the entire study period of one hour. Heart rate, breathing, blood pressure, and blood oxygen levels were not significantly affected in either group. However, there was still a more than noticeable difference in side effects.

The morphine group reported a total of 85 negative side effects, with the vast majority of these being dizziness, nausea, and vomiting. Only 4 negative effects were reported in the acupuncture group; 3 of these were needle breakage and 1 was a patient fainting (four fainted in the morphine group).

The conclusion to this study was that acupuncture is safer than and at least as effective as intravenous morphine; it can be used to control acute pain in those presenting to emergency departments; and more research should be conducted on international populations to strengthen the evidence base.

“This article provides an update on one of the oldest pain relief techniques (acupuncture) that could find a central place in the management of acute care settings. This should be considered especially in today’s increasingly complicated and polymedicated patients to avoid adverse drug reactions,” the study concluded. 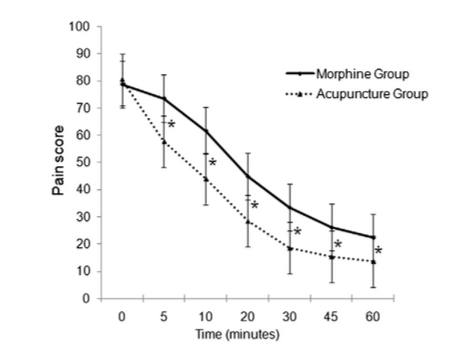 But That’s Not All!

The World Health Organization reports that a number of other studies have shown acupuncture to be effective for pain, among other symptoms, in a range of conditions from ulcerative colitis to tennis elbow to rheumatoid arthritis and neck pain – with little to no side effects.

On the other hand, it is estimated that 69,000 people die every year from opioid overdose, partly because of the risk of addiction. Opioids can cause respiratory depression, as well as sedation, dizziness, nausea, vomiting, and constipation. Hypersensitivity to pain, muscle rigidity, immune and hormonal dysfunction are less common side-effects.

Overall, the use of acupuncture instead of opioids, or to reduce the usage of them, in hospitals should be taken more seriously; it is a safe and effective treatment – not crazy pseudoscience.

The study was performed over a 1-year period in the Fattouma Bourguiba University Hospital in Tunisia.