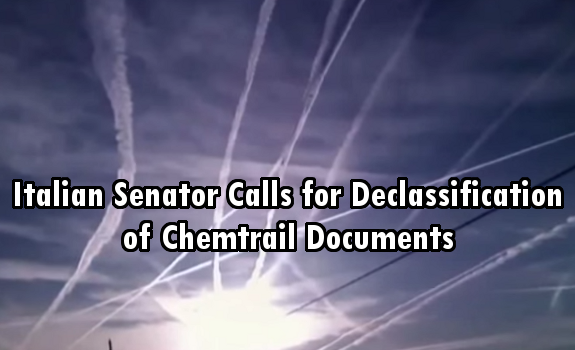 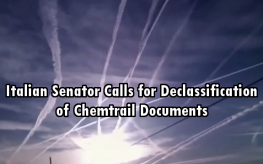 Have you noticed increased cases of Alzheimer’s and Autism? The CDC recently admitted that autism numbers have doubled in a decade and more than 5 million Americans have a form of dementia. While there are multiple contributors to these phenomenon, including the increased use of pesticides and herbicides, the decline of real food, and the degradation of our environment as a whole, it is likely chemtrails play a significant part in the cognitive decline of our nation as well.

Our politicians, however, refuse to comment on the subject, with the exception of a rogue informant often put swiftly back into his place by mainstream media and their puppeteers. Now, an Italian senator is demanding that important state secrets be declassified so that the world can understand what is really happening in the sky above.

Senator Domenico Scilipoti is not a champion for every Italian, often accused of taking party sides wherever it will benefit him personally, but he is aiming to abolish the classification of documents regarding the death of Ilaria Alpi, an Italian journalist killed in 1994 after she discovered radioactive toxic waste was being shipped to Somalia. There is a free documentary people can watch here, but it is not allowed in the US. Quite some censorship. Why?

Read: Neurologist Warns of Exploding Neurodegenerative Diseases Due to Chemtrails

The Senator wants chemtrail or weaponized weather documents to be declassified as well. The reason? Because through Vittorio Prodi, the USA signed a bilateral agreement on climate research. In 2003, former Minister Martino authorized the USAF to fly over Italian airspace. The Senator of the ‘Forza Italia’ party is now hoping to expose State Secrecy on chemtrails – the same ones we are still denying exist.

The planes flying over Italian airspace were dispersing heavy metals into the air, provoking pollution and rain which causes damage to agriculture. It is the same toxic rain that is pouring down on us in our own country through chemtrails – detailed thoroughly in papers be the late Dr. Ilya Perlingueri. As she states:

“For more than a decade, first the United States and then Canada’s citizens have been subjected to a 24/7/365 day aerosol assault over our heads made of a toxic brew of poisonous heavy metals, chemicals, and other dangerous ingredients. None of this was reported by any mainstream media. The US Department of Defense [DOD] and military have been systematically blanketing all our skies with what are known as Chemtrails (also known as Stratospheric Aerosol Geoengineering).”

Scilipoti has requested the Italian Prime Minister to abolish the secrets on chemtrails. Our government officials should do no less.

9 responses to “Italian Senator Calls for Declassification of Chemtrail Documents”